Why Elephant Trunks Have 40,000 Muscles (And Other Amazing Facts For World Elephant Day) The speed picks up. Dust spirals behind your vehicle. Each member of your small group holds onto their hats as the Land Cruiser draws near, closer, so close now that those horizon dots grow feet and legs, big legs, legs the size of trees. And above those legs flap huge ears, wailing trunks, and leather skin.

Closer you drive until you’re twenty feet from these beasts, animals about as far from ants as you could ever imagine. You’ve spotted a herd of thirty African bush elephants. The herd is spread out, and your guide explains they are all headed towards the river for a drink.

“They can drink up to fifty gallons a day,” your guide explains. “About the amount of a typical bathtub!”

This flotilla of land mammals — the largest on the planet — slides steadily along the savannah, and you drive along next to them for the next hour, speechless, in awe. Sure, this landscape is vast, but this elephant sighting just made it larger-than-life. 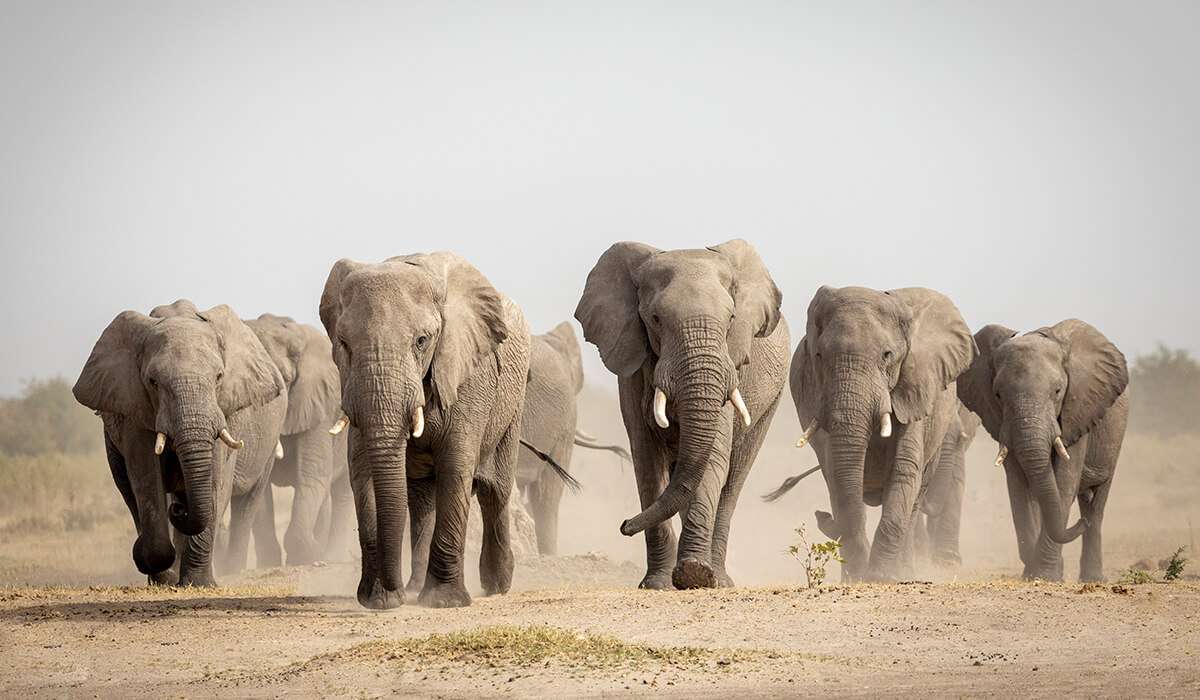 A safari just isn’t complete without an intimate encounter with an African bush elephant. These Cadillacs of the Serengeti are just too iconic, and too powerful to avoid.

As one of the “Big 5”, you will most certainly encounter your fair share of elephants in Tanzania, so why not arrive with a few important elephant facts?

Elephants by the Numbers: Five Need-to-Know Statistics about the African Bush Elephant. 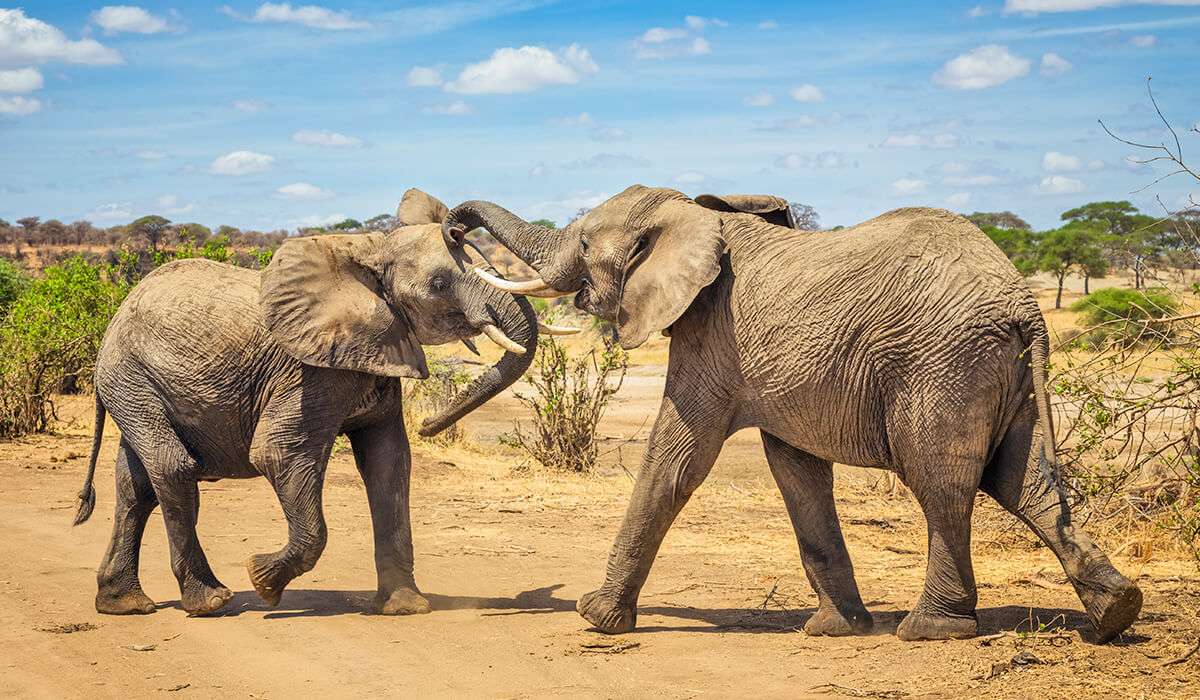 300 Pounds. Large bodies mean large appetites, and the African bush elephant is constantly having to shove grasses, roots, and bark into its mouth to fend off hunger. These guys are known to eat upwards of 300-350 pounds of food per day!

40,000 Muscles. Each trunk of an average elephant carries 40,000 muscles in their trunk. Crazy, right? Unlike popular belief, these trunks are not used for drinking but, rather, to flip water into their mouths, almost like a spoon. Here are some other amazing things for which elephants use their trunks.

50 Years. Adult elephants will mate up until they are aged 50, and females will typically give birth every 5 years. Sometimes the births can take days, and baby elephants, as you might have guessed, are large upon arrival. Can you imagine giving birth to a baby that weighs 300 pounds? ( Source)

8/12. Mark your calendars, because August 12 is World Elephant Day, a day dedicated to “bring attention to the urgent plight of the Asian and African elephants” worldwide. Started in 2011, this day is now officially recognized by over 65 wildlife organizations, many countries, and popular celebrities. Easy Travel supports World Elephant Day, along with many social and environmental initiatives. Learn more and follow their important work here. 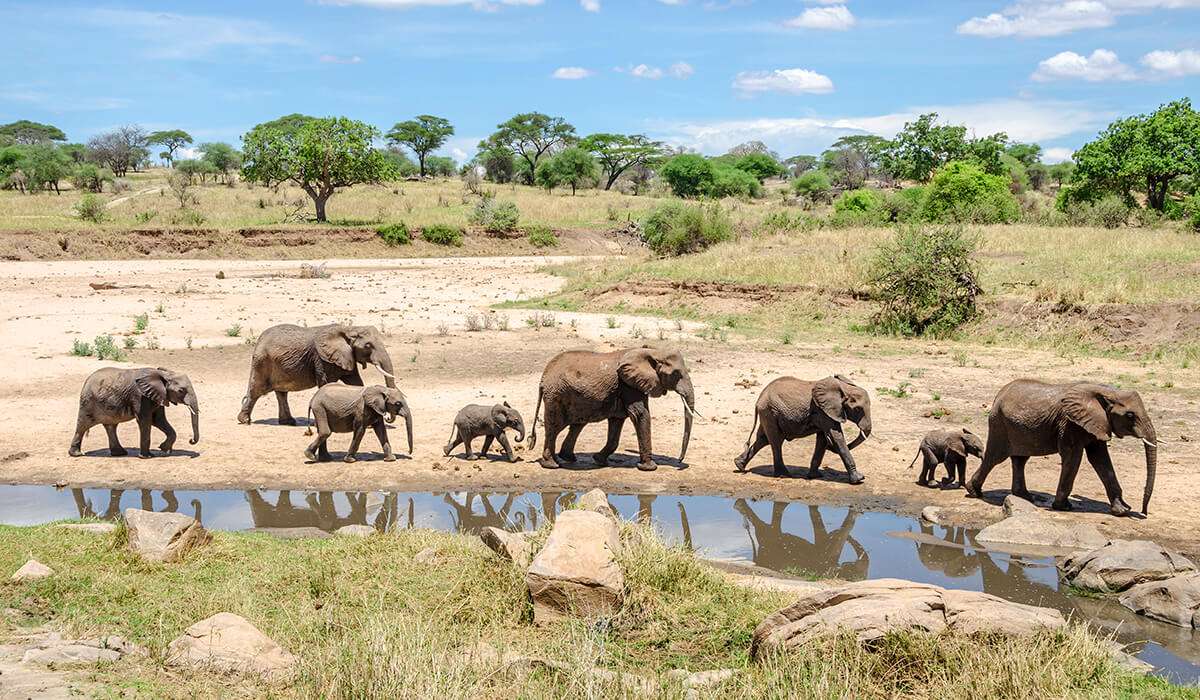 We love elephants. So much. To be fair, there are dozens more fascinating elephant behaviors to learn about — Herds are led by a matriarch! Elephants grieve and weep, and feel joy! — but know this: any Easy Travel tour will guarantee you a close-up experience with these incredible African bush elephants, found nowhere else on Earth. Our experienced guides have decades of experience and can share loads of elephant information with you, too.

Contact us today and let’s get you started on designing an experience of a lifetime. Our Easy Travel staff can customize trips for you to elephant-dense corners of Tanzania.