Which is the best route to climb mount Kilimanjaro

Before climbing Mount Kilimanjaro, it’s best to know that there are seven well-established routes that you can choose for your trekking adventure.

But, which is the best route to scale Mount Kilimanjaro? The answer to this question depends on your experience, fitness, and the views you want to see. If you’re an inexperienced climber, the best route for you is the Marangu route. It’s the easiest route and only takes five days to trek.

However, if you’re an adventurous person and want to see the best views in Kilimanjaro, the Machame route will suit you best!

Picking the best course for your Kilimanjaro climb can be daunting, as you have to consider several factors, such as:

Thus, we made this guide to help you come up with the best route possible for your Kilimanjaro climb. So, without much further ado, here are the seven routes in Mount Kilimanjaro: 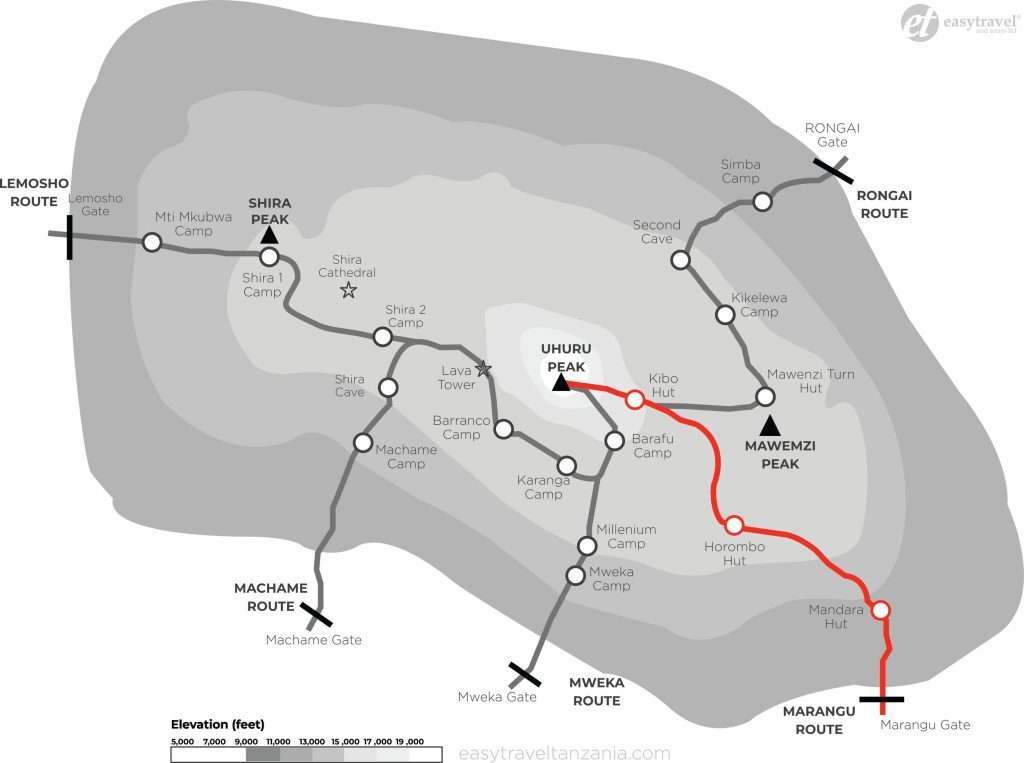 The Marangu ‘Coca Cola’ route is the oldest, most well-established path on Kilimanjaro. Many trekkers prefer this route as this is the most straightforward course on the mountain due to its gradual slope.

In addition, it’s also the only track that offers sleeping huts in dormitory-style accommodations. Using this route will only take you five days to complete your climb.

However, the success rate of this route is pretty low due to acclimatization. Using a longer route will help your body acclimatize better to the mountain’s environmental conditions.

The route’s short time frame makes the acclimatization more difficult. This trail approaches from the southeast and is less picturesque compared to other tracks as it has the same ascent and descent route.

Pros in Using the Marangu Route

Cons in Using the Marangu Route

If you’re looking for the breakdown of itineraries for the Marangu route, you’re in the right place!

Machame route, also known as the whiskey route is the most famous route in Kilimanjaro due to its scenic landscapes. However, this mountain trail is challenging due to its steep hills and difficult path.

Thus, this route is ideal for more adventurous types of people or those who have experience in hiking, backpacking, or dealing with high altitudes. However, if you’re hell-bound to try this route, make sure that you’re physically fit to tread on this trail.

Cons in Using the Machame Route 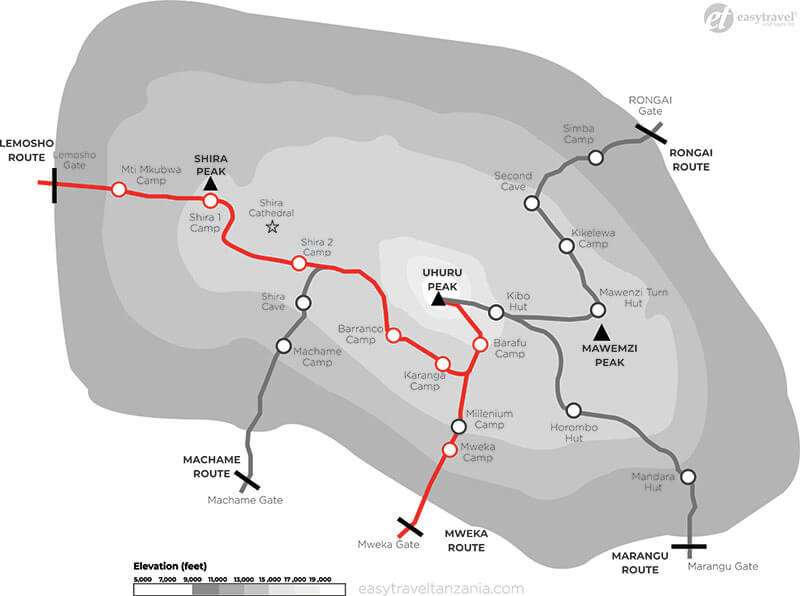 Choosing the Lemosho route for your trek can provide you with the most spectacular path on Kilimanjaro. This route will grant you scenic views on different sides of the famous mountain.

This is one of the newer routes in Kilimanjaro and one of the most recommended due to its beautiful scenery, high success rates, and low crowds. This route advances Mount Kilimanjaro from the west, commencing from Arusha to the Londorossi Gate.

From the Londorossi Gate, you’ll spend the first two days trekking the rain forest to Shira Ridge. This path traverses the Shira Plateau from west to east, having only a few crowds until route intersection on the Machame trail near the Lava Tower.

The route then crosses underneath the Southern Ice Field of Kilimanjaro on a trail known as the Southern Circuit. Then, descend through the Mweka route.

Pros in Using the Lemosho Route

Cons in Using the Lemosho Route

The Shira Route is a little-used trail, starting near the Shira Ridge. It is almost indistinguishable from the Lemosho route.

Shira was the primary route, and Lemosho is the improved variation of the route. Although Shira is a diverse and fascinating route, it’s less desirable due to its relatively high altitude.

This trail advances Mount Kilimanjaro from the west side, commencing with a drive from Arusha to Shira Ridge. The vehicle will pass through the rain forest zone and begin the hike on Shira Ridge.

The Shira route crosses the Shira Plateau as a whole from west to east and traverses underneath Kilimanjaro’s Southern Ice Field. This is known as the Southern Circuit. The Mweka route will be our descent trail.

Pros in Using the Shira Route

Cons in Using the Shira Route

Opting for the Northern Circuit will offer you 360 degrees of stunning views, including the infrequently visited northern slopes. This is the longest route in Kilimanjaro and has the most acclimatization time with the highest success rate.

Pros in Using the Northern Circuit

Cons in Using the Northern Route The Rongai route is near the Kenyan border. It’s the sole route that advances Kilimanjaro from the north. This route has low crowds and has a gradual slope than other routes of the mountain.

This route is highly recommended for those with little to no backpacking experience.

Pros in Using the Rongai Route

Cons in Using the Rongai Route

The Umbwe route is deemed the most challenging track on Mount Kilimanjaro. Due to the fast ascent to high altitude, this route does not present the required steps for acclimatization.

Though the traffic of this trail is quite low, the success rate is also low. This route is very challenging to climb and is ideal only for those who can acclimatize to the altitude quickly.

Pros in Using the Umbwe Route

Cons in Using the Umbre Route

The busiest route in Kilimanjaro 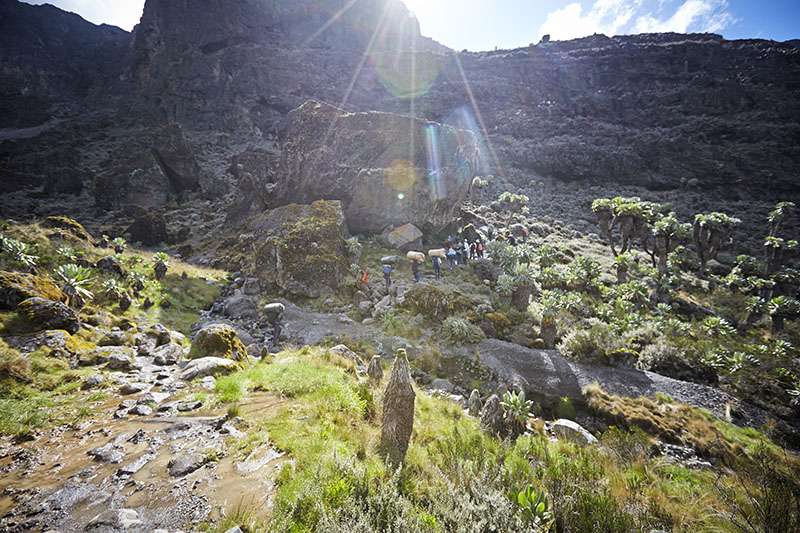 The busiest route in Kilimanjaro is the Marangu route. It’s the busiest out of all routes and receives almost half of all trekkers in Kilimanjaro. The next busiest is the Machame route—the second of the most famous routes chosen by third of all tourists.

The most picturesque in Kilimanjaro 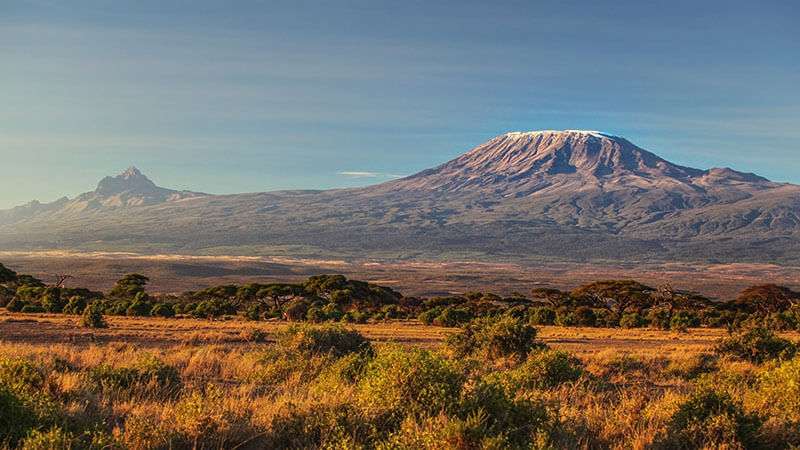 The most picturesque out of all routes are the Lemosho route, Machame route, Rongai route, and the Northern Circuit.

Our favorite out of all routes, considering the scenery, difficulty, and traffic, is a combination of the Lemosho route and the Machame route. The Lemosho route takes around 8 days to trek while the Machame route takes around 7. These routes offer some of the best views of the mountain with less traffic and good acclimatization opportunities. If you need help planning your route, safari or any itineraries for your adventure in Tanzania, contact Easy Travel and our team of experts will assist you every step of the way.