When is the best time to climb Kilimanjaro?

When is the best time to climb mount Kilimanjaro Climbing Kilimanjaro isn’t an easy feat. Thus, knowing the best time to ascend the mountain is the best way to ensure reaching the peak.

So, when is the best time to climb Mount Kilimanjaro? The best time to climb the highest-free standing mountain in the world is during Tanzania’s dry season. This means it would be best to scale from December to March or the middle of June to the end of October, which are the driest months in Tanzania.

Climbing Mount Kilimanjaro is a mighty challenge, but practically everyone can do it. In addition, if you’re a newbie to trekking, camping, living outdoors or high altitude, you might find the hike up Kilimanjaro quite challenging indeed.

Thus, it’s essential to scale the mountain during the driest months in Tanzania and avoid climbing in April, May and November as these are the rainy seasons in the country.

Does the weather change in Kilimanjaro Yes, the weather in Kilimanjaro changes everyday. It can vary from hot to cold in just one day, and experiences significant temperature changes from season to season.

Although the best time to climb Kilimanjaro is during the dry seasons, you may still opt to hike the mountain during the rainy and snowy seasons. However, you must be ready for a much more complicated and dangerous climb. Perhaps one of the best experiences on your Kilimanjaro climb is seeing the glaciers glittering in the moonlight. This only occurs when you choose to ascend during the full moon.

The stunning view of the glittering glaciers amidst clear evening skies is one of the reasons why most climbers choose to coincide their climb during a full moon.

Kilimanjaro’s full moon happens every 29 days, giving you 12 opportunities per year to witness the full moon and see the glistening glaciers of the mountain. Thus, you can expect to behold the beautiful celestial spectacle from the peak of Mount Kilimanjaro.

The traditional seasons for trekking Kilimanjaro are through earlyDecember to March and June to October. During these months, you can have panoramic photo opportunities and comfortable trekking conditions.

The best trekking months for Kilimanjaro are:

Although there are short rainy days during December, it’s still one of the best months to trek. Meanwhile, January and February are the most popular climbing months as the weather is warm, clear and sunny during the day.

In addition, early March is also one of the best times to hike Kilimanjaro. However, it’s not ideal to scale at the end of March as it’s the commencement of the rainy season, and the trails can get very wet, muddy and snowy, giving you poor visibility of the tracks.

Furthermore, April and May aren’t suitable for climbing, so avoid these months as much as possible. The month of June is the transition period from rainy to dry season. Thus, this month is usually drier than March, April and May. Nonetheless, you’ll still need to prepare for the cold temperatures.

The skies during June are typically cloudy, so you might not get the best views of Kilimanjaro. However, weather conditions are generally colder from July to October but drier compared with the previous months.

Though there’s a chance of getting rained on throughout the year, rainfall is typically low and infrequent from June to October.

Zone 1 on Kilimanjaro is the Cultivation Zone. The altitude ranges from 792 m to 1,800 m. You can find plenty of human activities in this zone and see grazing livestock and small farm operations.

You can also find several rivers formed by the glacier run-off on the top of the mountain. Most of the porters and guides are from this part of Kilimanjaro.

The rainforest zone is the montane found encircling the whole mountain, also known as the rain forest. This forest is dense and wet and is home to many birds and other animal species.

Ever since the increase of human activity in the area, the big game has been rare, but plenty of monkeys and birds are around.

As you enter the Heather and Moorland zone, you’ll be greeted by the majestic views of giant heathers and tussock grasses, as well as the scrubby shrubs. When you ascend, the average temperatures drop.

You’ll also see giant lobelias and senecios, which have developed unique characteristics, allowing them to adapt to the drastic temperature changes of the place.

The Alpine Desert Zone is barren and bleak. Thus, only the toughest plants exist in this area. You’ll often see tussocky grass and small hardy plants with only little flowers in this landscape.

The Arctic zone is dry and freezing-cold during nighttime, opposed to the intense sunshine during the day. Due to the shortness of available oxygen at sea level, this part of Kilimanjaro is dominated by massive glaciers and towering boulders.

In this area of Mount Kilimanjaro, there are no animals or plants present except for lichens since the climate here is extremely cold. At nighttime, temperatures are typically below the freezing point.

During the day, as you set off to climb Kilimanjaro’s peak, there could be ice and snow underfoot. Also, expect the temperature to be bitterly cold even in the middle of the day.

Thus, it’s wise to bring sunscreen to protect your exposed body parts as the dry air can dehydrate you quickly. You’ll also need warm layers of clothing to keep your core temperature up.

Conclusion: When we recommend to climb Kilimanjaro 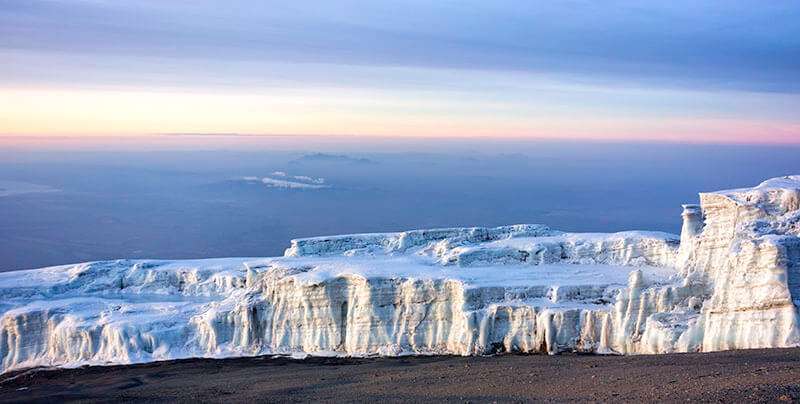 We recommend climbing Kilimanjaroin the months of January to February. These months are the driest in Kilimanjaro, offering you the best views and many perfect-pictures opportunities.

Furthermore, December to mid-March and mid-June to the end of October are also the best times to visit the mountain.

If you would like to climb Mount Kilimanjaro and have your own dates in mind, get in touch with our team of Kilimanjaro specialists here at Easy Travel.