Where to go in northern Tanzania 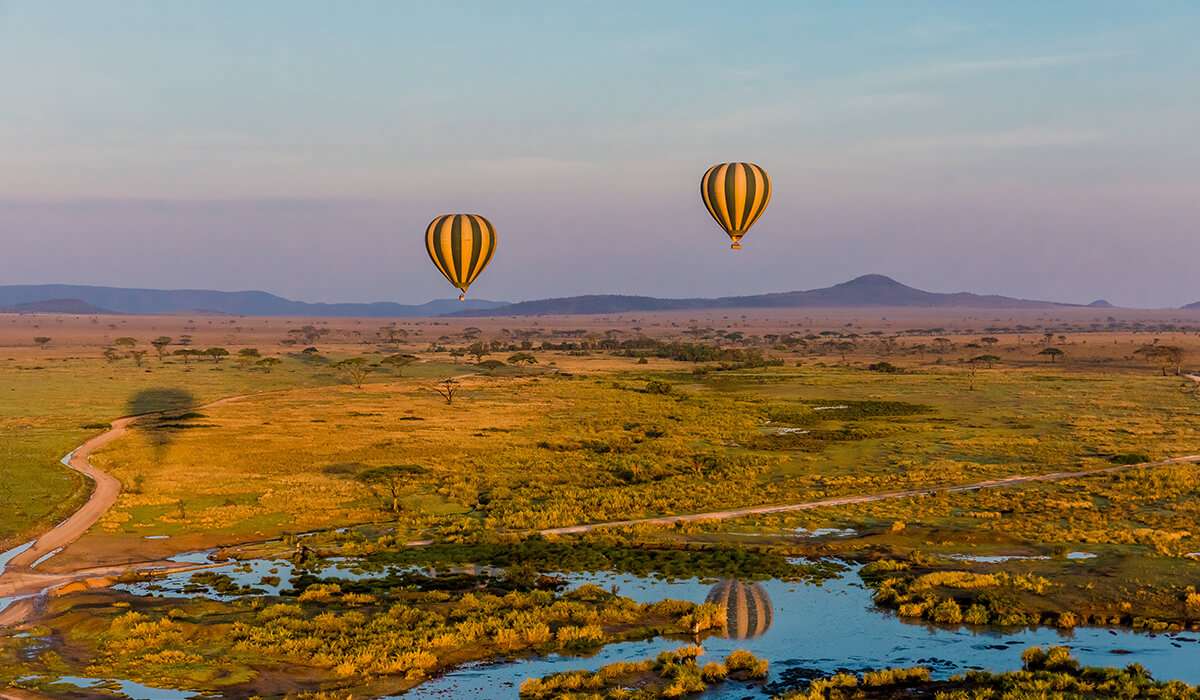 Tanzania’s northern circuit is undoubtedly the most popular of all four points of the compass in Tanzania. There are natural and cultural wonders aplenty on the northern circuit, most of them formed through the Great Rift Valley of northern Tanzania and southern Kenya.

The north is where you’ll find such world-famous landmarks as the sprawling Serengeti National Park, the iconic Ngorongoro Crater, and the highest mountain in Africa, Mount Kilimanjaro. However, the northern circuit has so much more to offer than that with incredible experiences everywhere you turn! 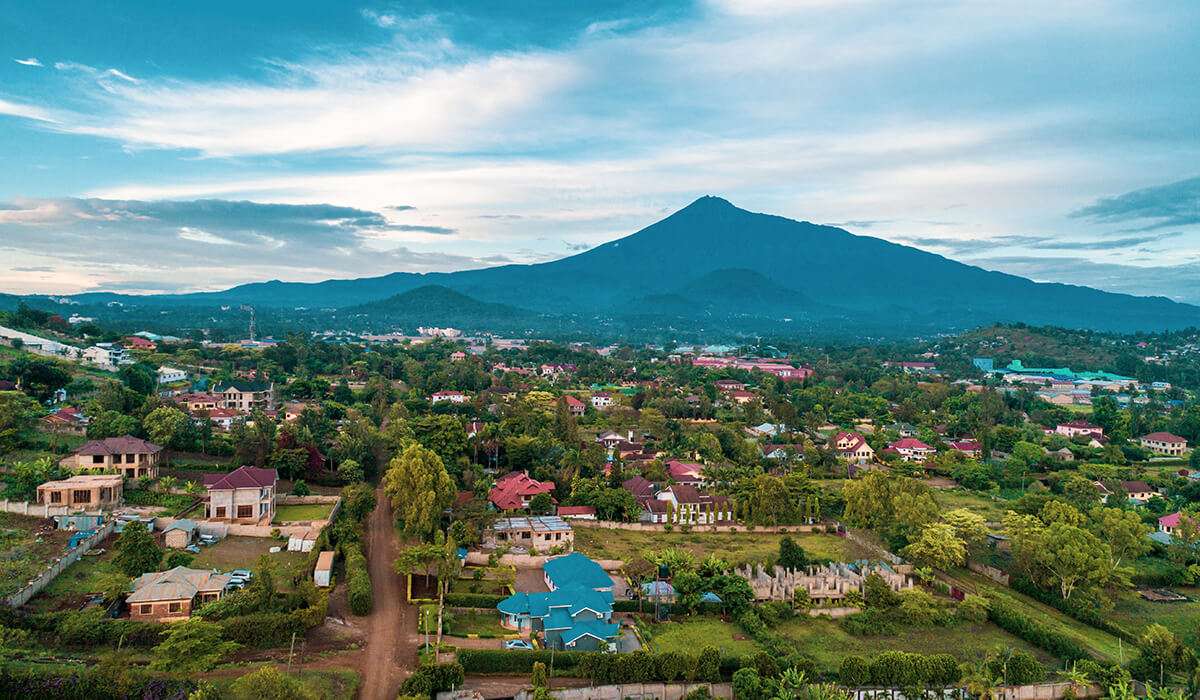 The north-eastern town of Arusha is essentially the gateway to nature; it is the last bastion of human civilization before heading into the wild. Chances are, if you’re going to any of the main tourist destinations in northern Tanzania like Kilimanjaro, Serengeti, Ngorongoro, or anywhere in the Great Rift Valley, you’re likely to stop in Arusha.

Arusha is not a large city when compared to Dar es Salaam, but it retains an important and significant role in East African society. A multicultural oasis, the city is perceived as neutral, and thus is the proposed capital of the potential East African Union. Arusha is approximately 20 minutes (15 km) from Arusha Airport and 1 hour (55 km) from Kilimanjaro International Airport. 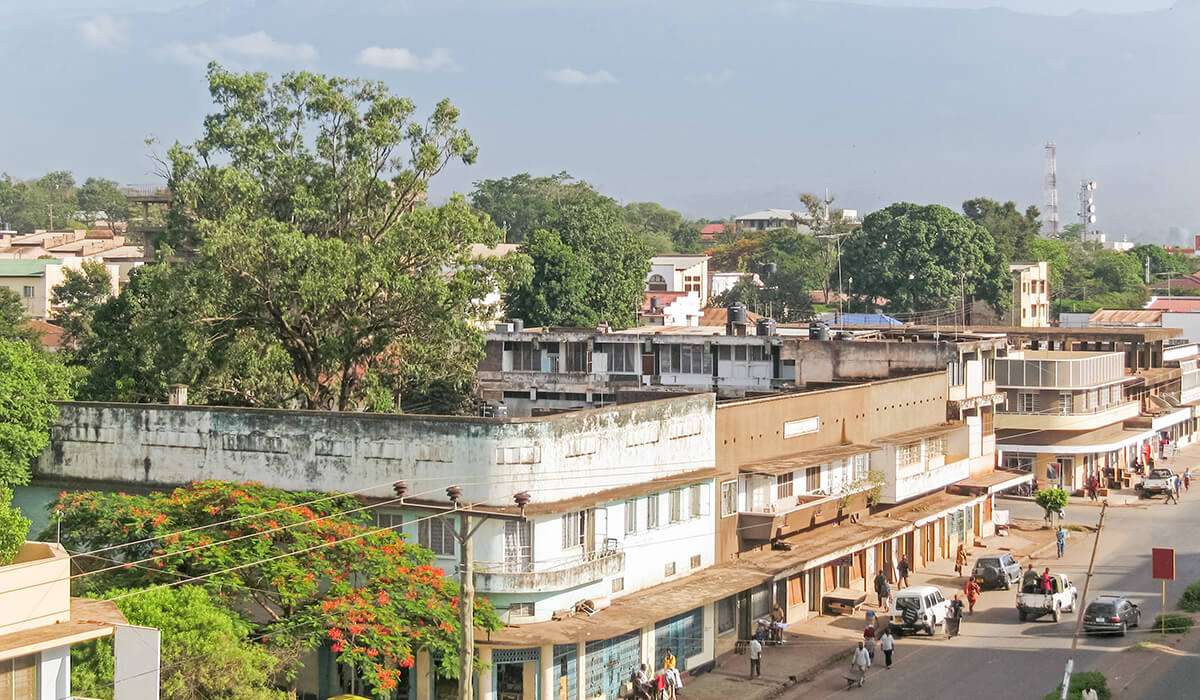 The far-north town of Moshi is on the smaller side, about half the size of its bigger sibling, Arusha. However, what it may lack in comparative flair and international renown, it makes up for in proximity to the highest freestanding mountain in the world, Kilimanjaro. Moshi is, after all, 45 minutes (35 km) away from Kilimanjaro International Airport.

Moshi is an important stop-over on the way up the mountain and is almost certainly where your journey to the roof of Africa is set to begin. While most of the tourism around Moshi is centered around the mountain and the national park, Moshi is a beautiful town in its own right. Named after the nearby city and region, Arusha National Park is small when compared to Serengeti, but it still has unforgettable sights. The national park is an approximately 160 km2 area surrounding Tanzania’s second highest peak, Mount Meru, and is almost exactly halfway between the city of Arusha and Kilimanjaro International Airport.

Even though smaller in size, Arusha holds a bustling population of local wildlife including giraffes, buffalo, zebra, and many prominent bird species. Though there are predator species in the park, they are few and rare to spot – so, if you see a leopard, consider yourself lucky! 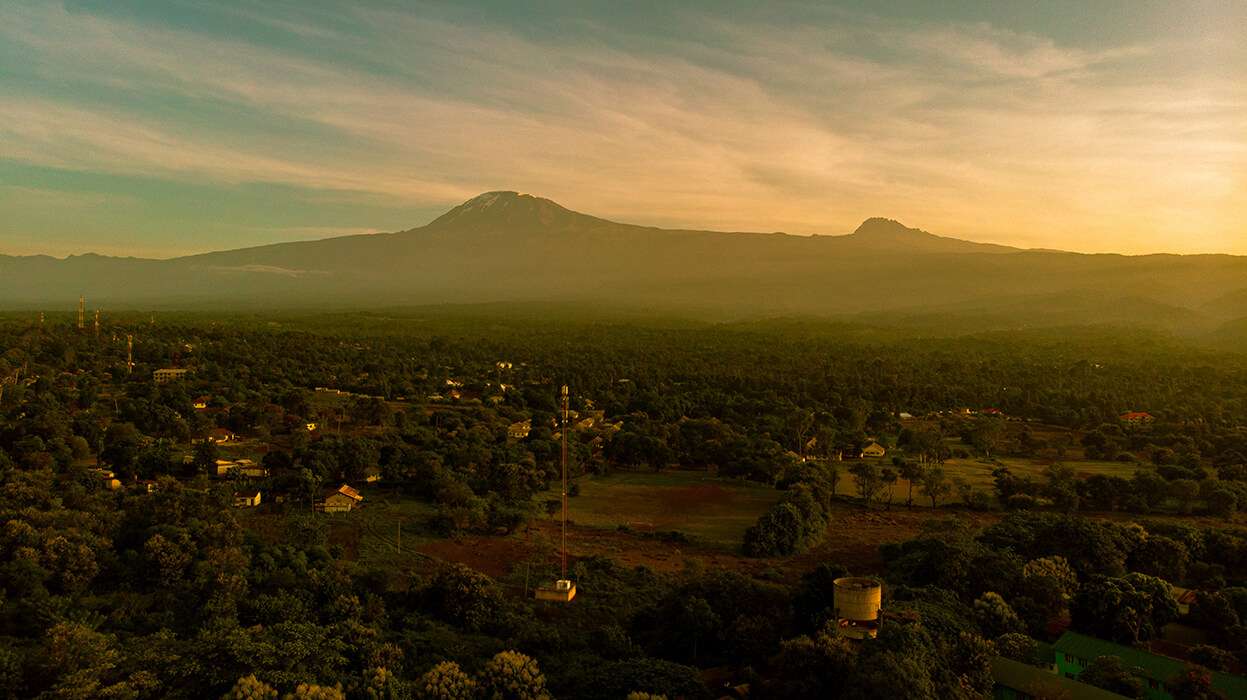 Pushed up right against the northern border with Kenya is Kilimanjaro National Park – and its name says it all. This protected area encapsulates Africa’s largest mountain, Kilimanjaro, and the surrounding flora and fauna.

While most national parks in Tanzania boast the Big Five and other iconic African animals, Kilimanjaro is more prominent for seeing mountain animals. Often, these are smaller animals like duikers, hyrax, or bushbucks, but there are some larger animals further down in the grassland like elephants, buffalo, and primates. 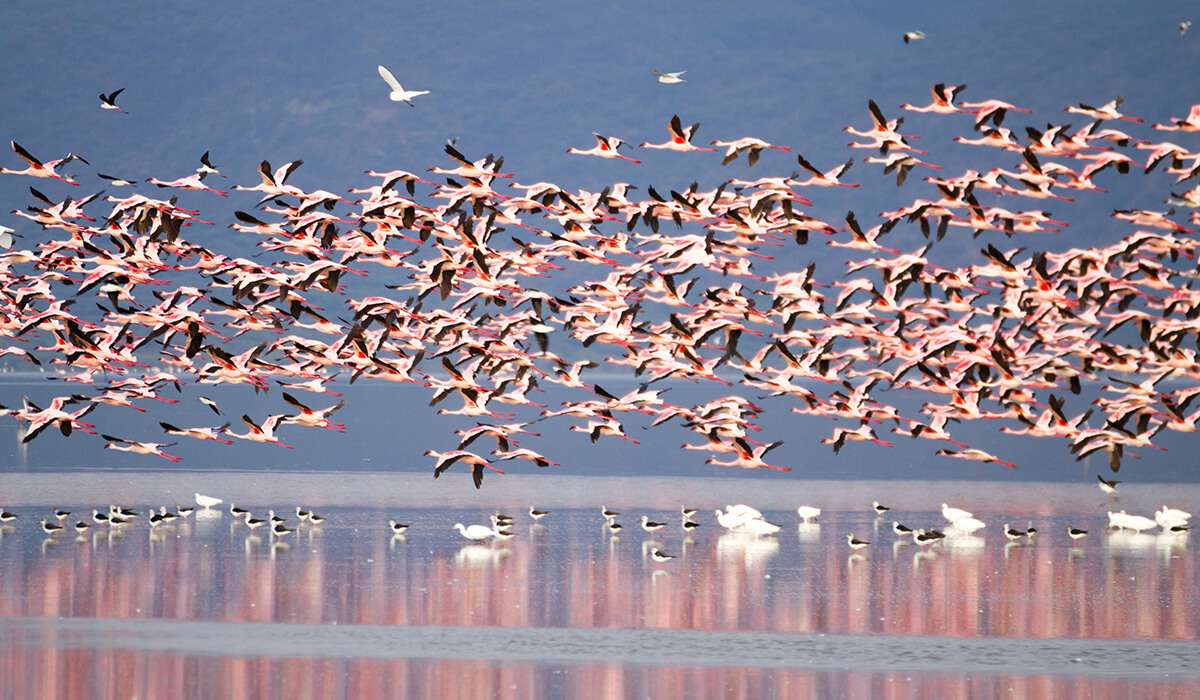 Parked between the Great Rift Valley and Lake Manyara itself is Lake Manyara National Park. The national park encapsulates and protects most of the lake and the surrounding wilderness – a smaller park surrounded by the ‘bigger’ names of the northern circuit.

While other, larger parks are known for their larger animals and huge herds or prides, this park is well known for its birding safaris. Lake Natron, Manyara is an alkaline lake and is home to hundreds of avian species including the iconic pink flamingos that feed on the lake during the wet season. 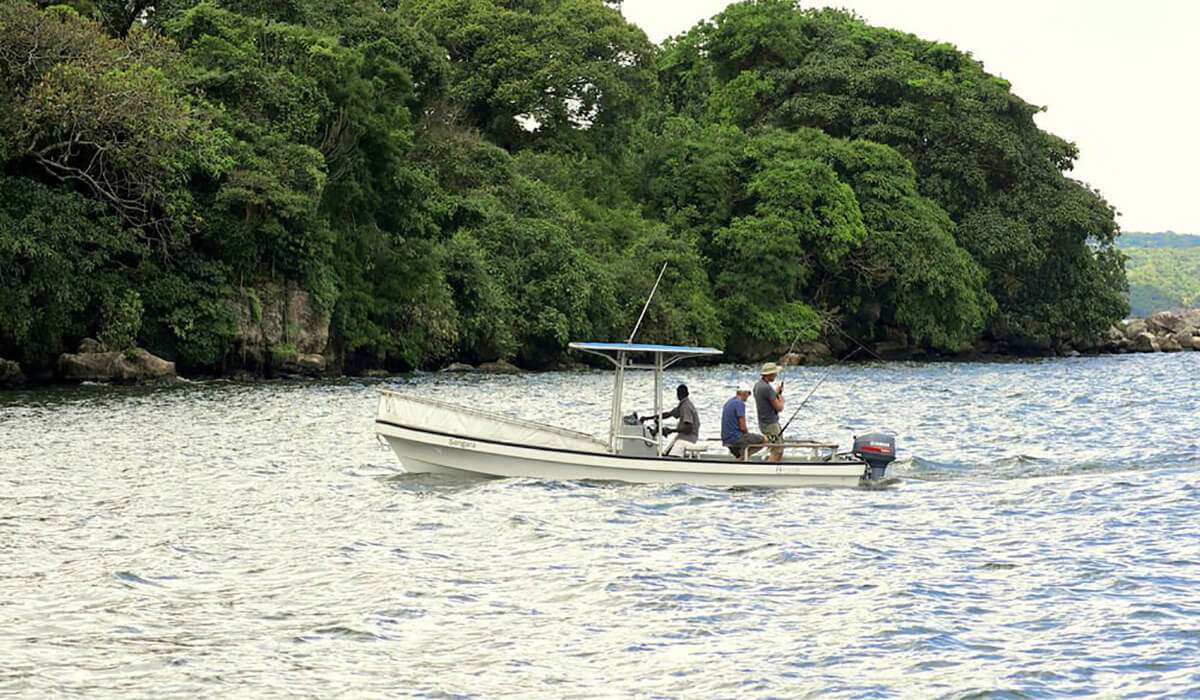 Rubondo Island National Park is an anomaly among the great national parks of Tanzania’s northern circuit – it is one of only two national parks situated on islands in the country. Set on the glorious deep blue waters of Lake Victoria, Rubondo island rises from the iconic lake and offers incredible natural sights.

The only way to get to this national park is by air from Arusha. While you won’t necessarily find big animals like in Serengeti, Rubondo is popular for birding safaris, boating, canoeing, and fishing – more of an angler’s destination rather than a traditional safari spot. Potentially the most famous safari destination on the planet, the only word that truly comes close to describing it is ‘epic’. Taken from the Maasai phrase for ‘where the land runs on forever’, Serengeti National Park and the events that take place there truly deserve their place among the Seven Natural Wonders of Africa.

Serengeti is home to the largest wildebeest, zebra, and lion populations in Africa, and is the location of many incredible natural wonders including the world’s second-largest terrestrial mammal migration, the Great Migration. In short, Serengeti defies description – as so much wonder and beauty cannot truly be explained: it must simply be experienced. 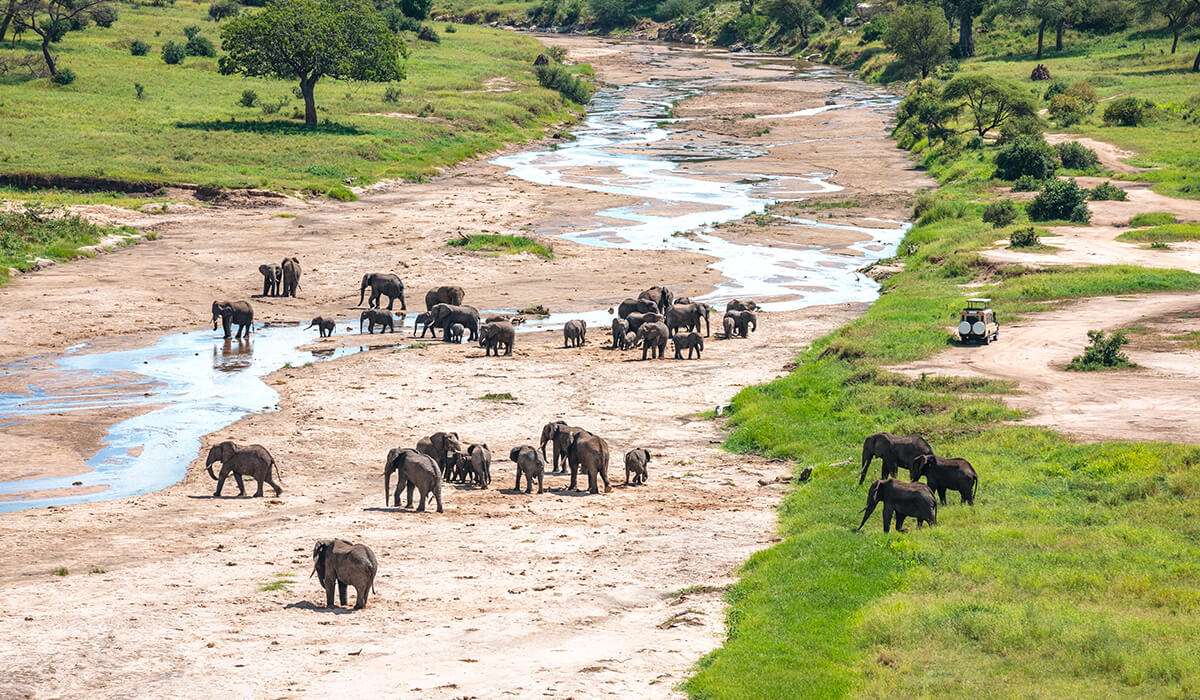 Tarangire is a park that is less well known than some, but still an incredible natural wonderland. Situated in the north of Tanzania, Tarangire’s landscape and ecosystem is formed by the great Tarangire River, where most of the wildlife in the park flock to during the dry season

While this national park is only a fraction of the size of Nyerere or Serengeti, Tarangire is well known for its high concentration of iconic animals like elephants, zebra, wildebeest, and buffalo, with lions, leopards, and cheetahs all residing there as well. The park is also famous for its picturesque baobab trees which dot the landscape. 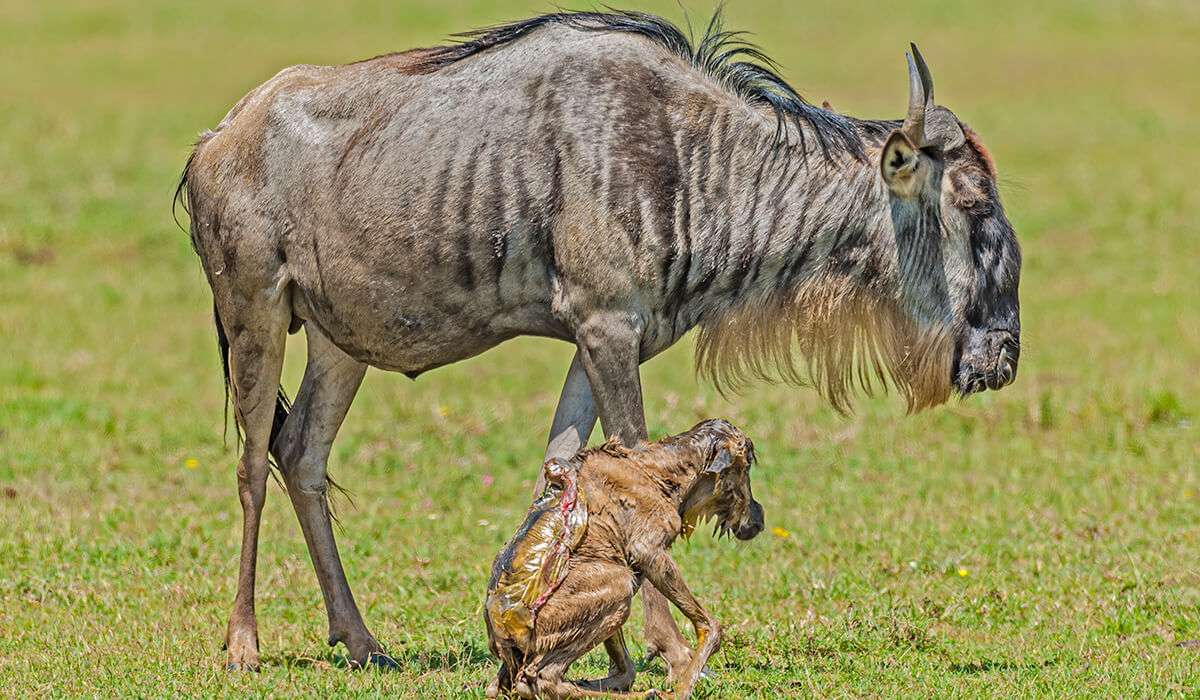 Ndutu is the best-kept secret of northern Tanzania. While often overshadowed by nearby Ngorongoro Crater (Ndutu is part of the Ngorongoro Conservation Area) and world-famous Serengeti National Park, Ndutu has a very important function in the Tanzanian ecosystem: it is the calving area for the Great Wildebeest Migration.

From December to March, the plains around Lake Ndutu become verdant with emerald grass, giving ample food and space where the wildebeest will give birth to over 8000 calves. As a result of this influx of young wildebeest, local predators will often try to take advantage. 180 kilometres west of Arusha, in the Crater Highlands of Tanzania, lies a true marvel of nature – the Ngorongoro Crater. Having held hominid habitation for the past 3 million years, Ngorongoro’s unique landscape, geology, and wildlife have created a thriving miniature ecosystem – truly deserving its place as one of the Seven Wonders of Africa.

Because of the high concentration of animals in such a relatively small and iconic setting, this is an incredibly popular tourist destination, if not the most popular destination in Tanzania. The Conservation Area also extends outside the crater, including some of the surrounding land and Olduvai Gorge. 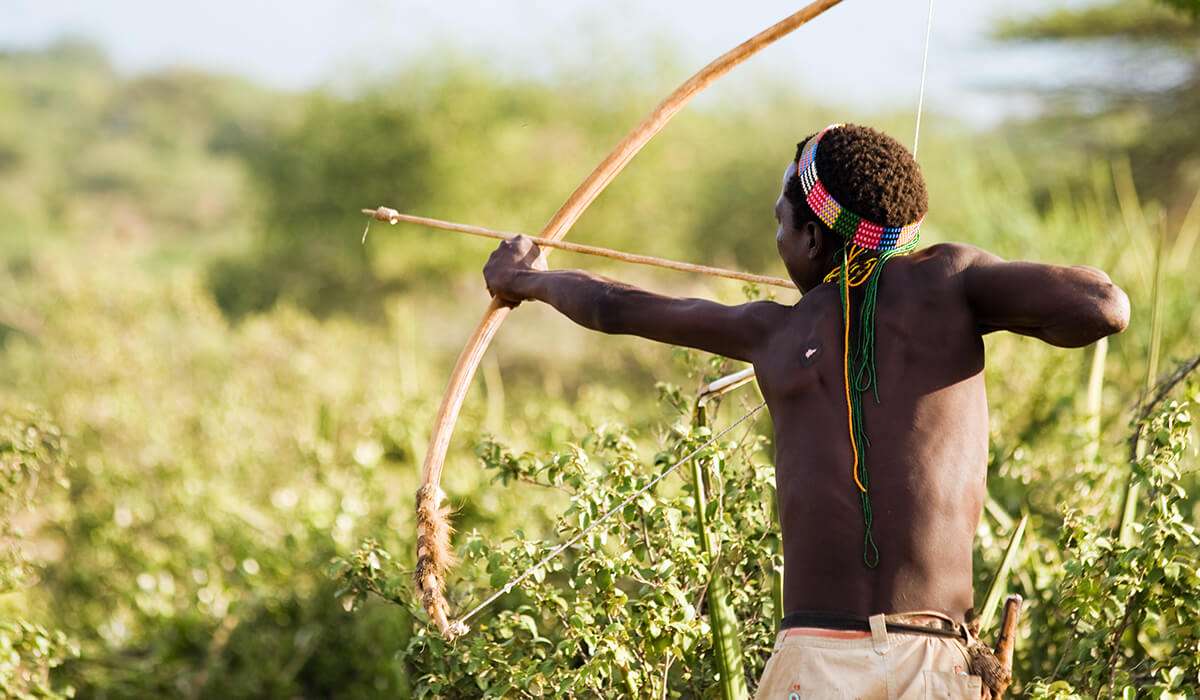 Situated between popular destinations like Serengeti, Ngorongoro, and the crater highlands, sits the ancient lakebed of Lake Eyasi. Like its better-known cousin, Lake Natron, Eyasi is a high-salt content lake with no outflow, so the only means of drainage is evaporation.

While the lake is a unique natural phenomenon today, it has ancient roots and is linked to the local Hazda people, who have congregated around the lake for centuries. Mumba Cave, a highly compelling archeological site, is also adjacent to Eyasi with its high alkaline presence helping to preserve the artifacts found there. 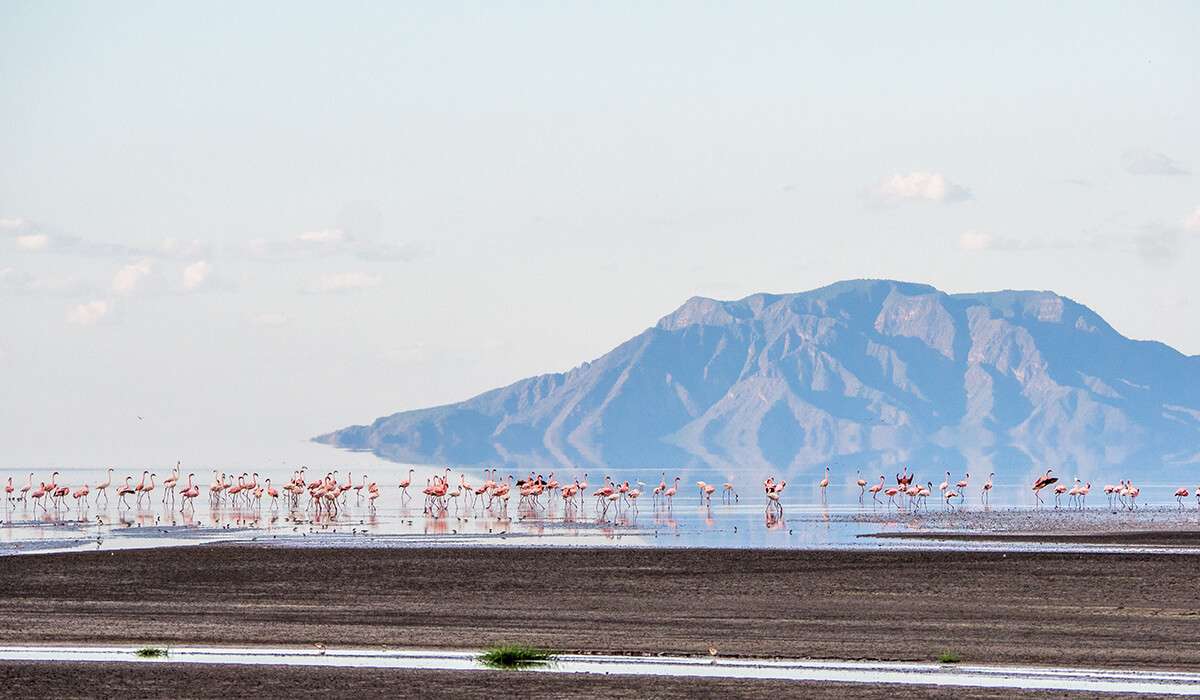 In every legend there is a grain of truth, and Lake Natron feels like it could be the inspiration of the Gorgons of Greek mythology. High in alkaline and salinity, this rare body of water produces its namesake, natron, in high quantities and has the potential to strip ink off of boats in seconds.

While the surrounding area is perfect for walking safaris and exploration, the Lake itself is probably most well known for, morosely, seeming to turn animals into stone. Due to the high base levels in the water, any animals that die in the lake become calcified due to the chemical composition of the water. 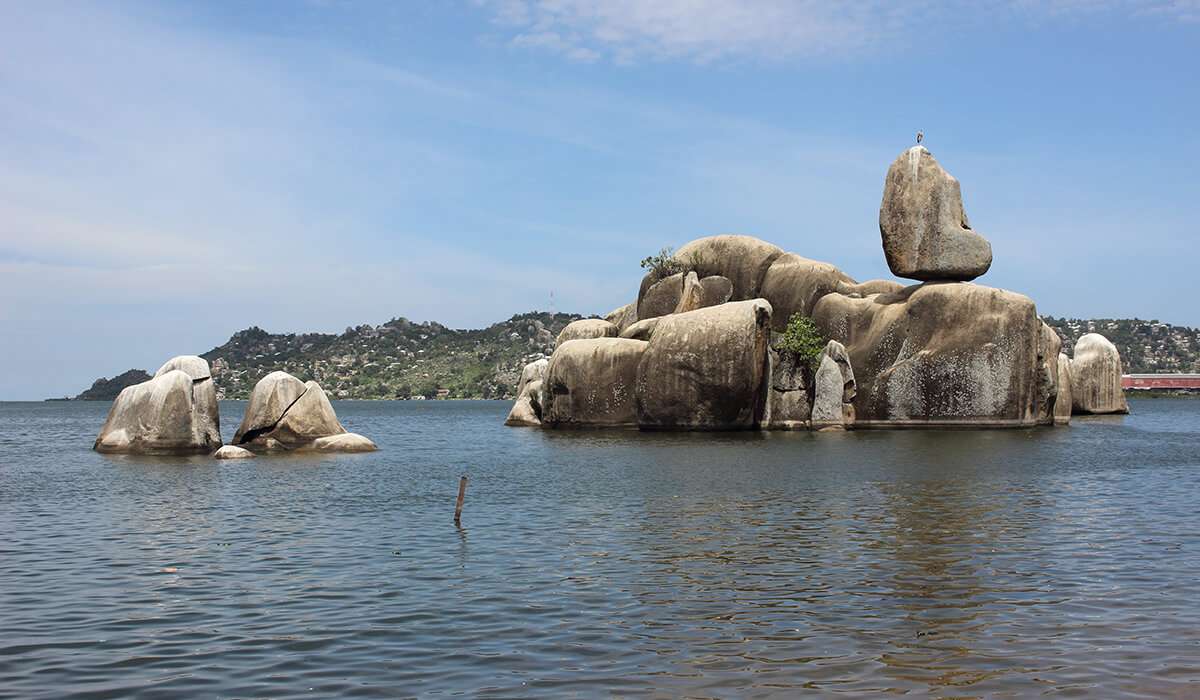 While Lake Tanganyika gets the award for being the deepest and oldest on the continent, there are few lakes in the world more iconic than the inland sea that is Lake Victoria. Second only to Lake Superior in North America, Lake Victoria is the second-largest freshwater lake in the world.

Sitting at the border of three different countries, Lake Victoria has a rich and varied history going back hundreds of thousands of years. Historic and cultural tours around Lake Victoria are popular, as are walking tours and bird watching. Due to the lake being a focal point for wildlife, safaris are also incredibly popular. 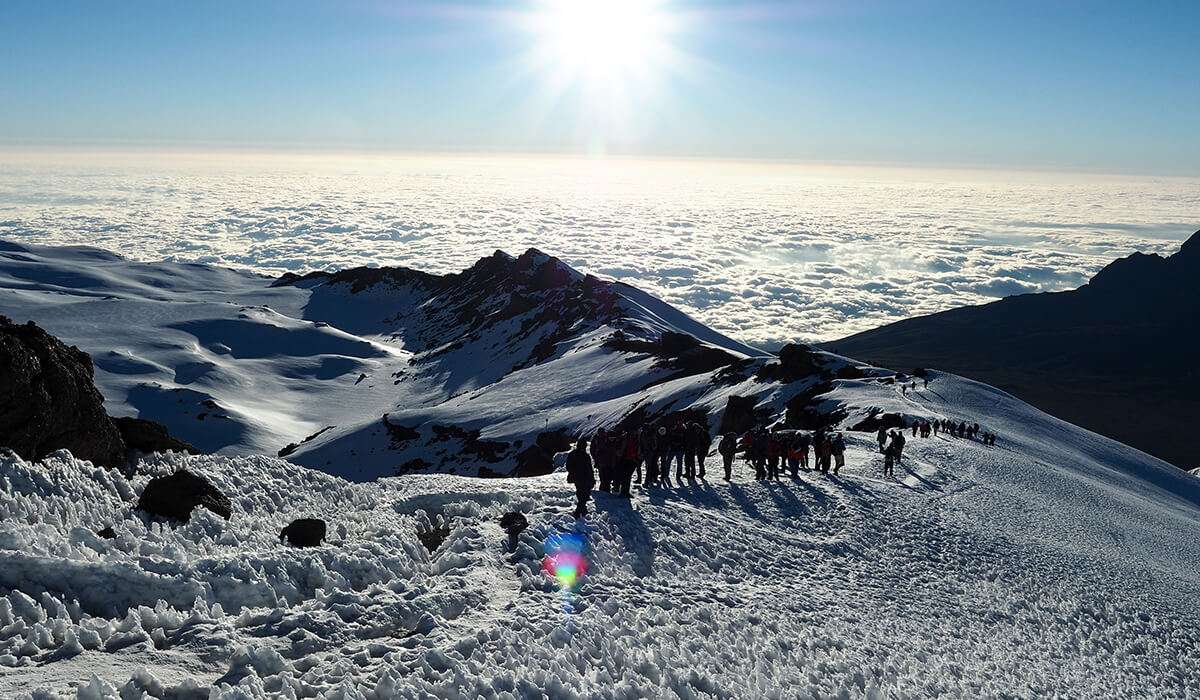 Because of its prominence, Kilimanjaro is a major tourist destination for mountaineers hoping to summit one of its three (dormant) volcanic cones. There are a number of well-beaten paths to summit the huge mountain – which one you partake in will often depend on what time of year you visit, so we will advise accordingly. 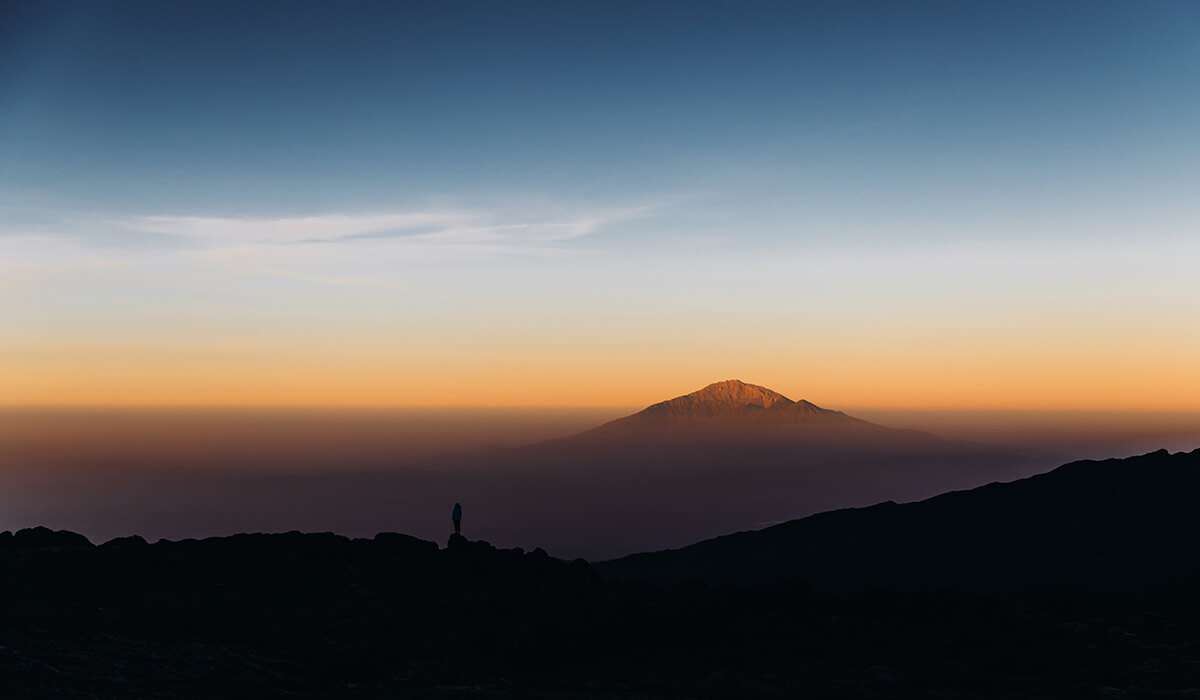 North of the city of Arusha, located in the spectacular Arusha National Park, stands the sentinel of Mount Meru – Tanzania’s second-highest and Africa’s fifth-highest peak. While not as prominent nor as world famous as its elder brother, Kilimanjaro, Meru is an iconic and memorable mountain in its own right.

Like Kilimanjaro, Meru is located in the north of the country, near the Kenyan border, and is a dormant volcano, having last erupted in 1910. Meru is also the central feature of Arusha National Park and on its slopes one can find a variety of iconic African flora and fauna. 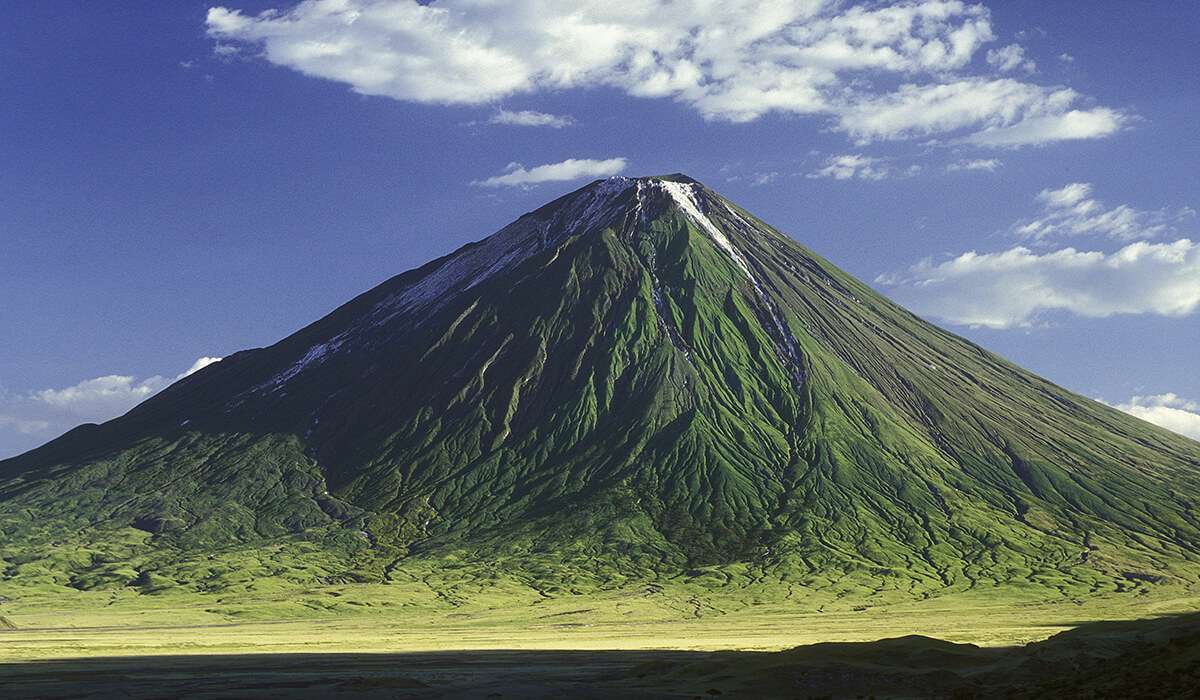 Ol Doinyo Lengai is a mountain of singular uniqueness – a place that stands out more than most even when surrounded by all the other enchanting sights of northern Tanzania. Known as the ‘Mountain of God’ to the Maasai people of the East African rift valley, Ol Doinyo Lengai is an iconic active volcano.

While its last major eruption was in 1966, the volcano continues to flow occasionally with its unique natrocarbonatite lava, the only place on the planet where the substance is produced. However, touring the volcano is quite safe and popular, especially when paired with a tour of nearby Lake Natron.