Before taking on Africa’s highest mountain, it’s best to know some interesting facts about Mount Kilimanjaro. With this, you’ll equip yourself with some knowledge that can make your Kili adventure more fascinating.

Mount Kilimanjaro is known as the tallest mountain in Africa and one of the seven highest summits globally. In addition to the known facts above, there are many other details about Kilimanjaro that you surely wouldn’t want to miss!

So, without much further ado, here are the top 10 interesting facts about Mount Kilimanjaro:

Facts about mount Kilimanjaro #1: It's the highest free-standing mountain in the world

Mount Kilimanjaro is the highest free-standing mountain around the globe at 5,895 meters above sea level. It comprises of three volcanic peaks—Kibo, Mawenzi, and Shira, Kibo being the summit.

Mount Kilimanjaro has seven official routes, and they are the following:

The first six routes are used for ascent, while Mweka is used for descent only.

Facts about mount Kilimanjaro #3: It's a subject of many scientific studies

Kilimanjaro is the fourth most topographically famous peak on Earth and is a significant part of Kilimanjaro National Park. Due to its shrinking glaciers and ice fields (projected to disappear in 2030 and 2050), it has become the subject of many scientific studies. 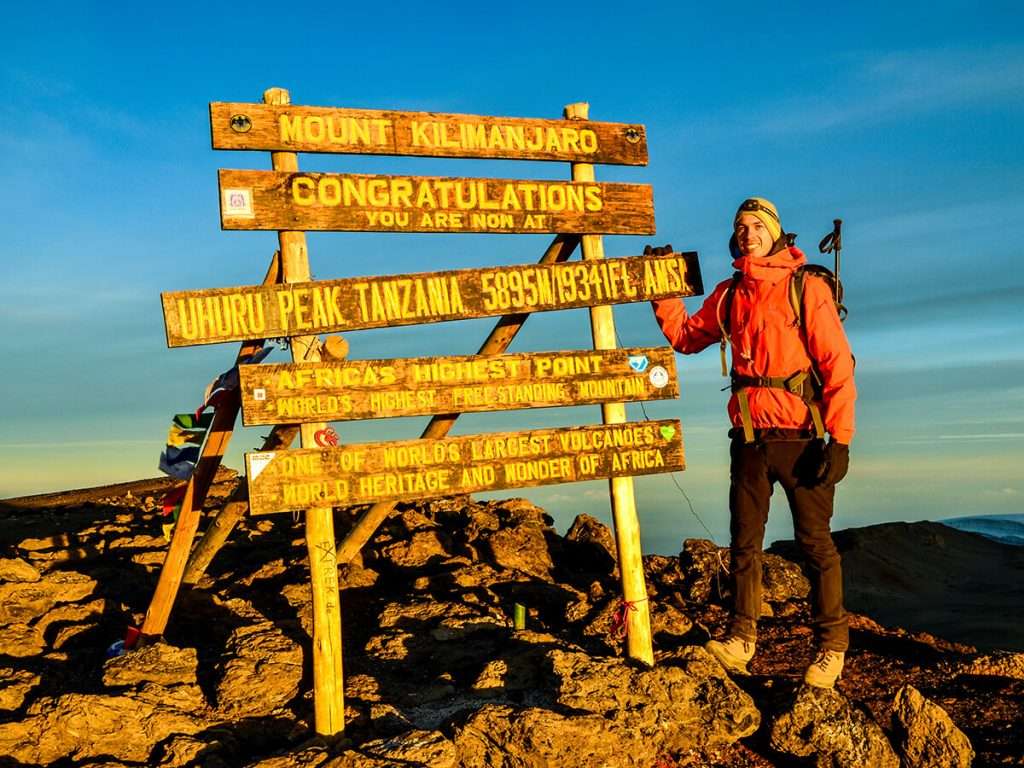 She conquered the summit of Kilimanjaro on July 18, 2019. The great grandmother fearlessly climbed the 19,341 feet mountain without an assistance of a team using the Rongai route.

Before her, there was Angela Vorobeva, 86 years old, who successfully climbed Mount Kilimanjaro in October of 2015. In man’s division, Fred Distelhorst, from Vail, Colorado, reached the Uhuru Peak on July 20, 2017, at 88 years old.

This only proves that anyone can climb the Highest Peak in Africa as long as you’ve got the determination to do it!

Mount Kilimanjaro last recorded volcanic activity happened 200 years ago, resulting in the ash pit that can be seen from Uhuru Peak.

Facts about mount Kilimanjaro #6: The last eruption was 360,000 years ago 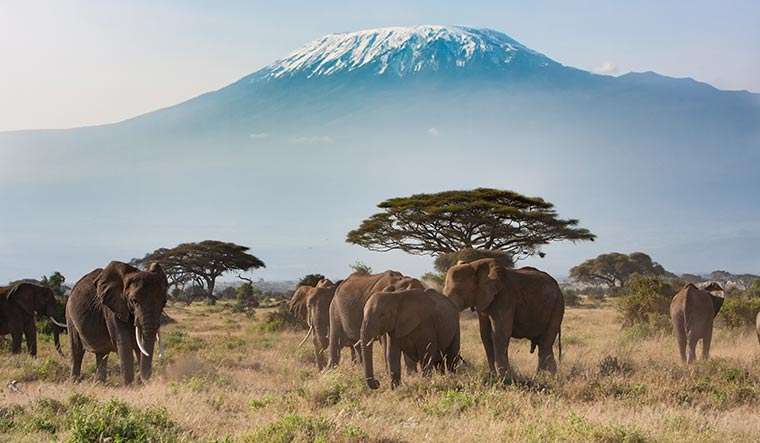 There are three volcanic zones on Kilimanjaro—Shira, Kibo, and Mawenzi. Both Shira and Mawenzi are inactive, but Kibo, on the other hand, remains dormant, which means it could erupt again. The last massive eruption transpired 360,000 years ago.

Facts about mount Kilimanjaro #7: Only 2/3 of climbers reach the summit due to altitude problems

There are about 35,00 people who try their best to climb Kilimanjaro each year. However, altitude problems like the following force the climbers to turn back:

Thus, only two-thirds out of 35,000 people can climb the Uhuru Peak successfully.

The ecological system on Kilimanjaro is rich and diverse. It consists of rainforest, cultivated land, heath, moorland, arctic summit, and alpine desert.

Facts about mount Kilimanjaro #9: Bernard Goosen conquered the mountain twice in a wheelchair

If you doubt that you can climb the highest mountain in Africa, you might stop doubting yourself after this. Bernard Goosen, a South African, was able to reach the peak twice with his wheelchair!

Goosen’s first summit happened in 2003 that lasted for nine days. His second occurred in 2007 and lasted only for six days.

Bernard Goosen was born with cerebral palsy, so he typically can’t move without his wheelchair or any assistance. But, due to his passion and determination, he used a modified wheelchair to scale the Kilimanjaro Mountain, mostly without help.

Facts about mount Kilimanjaro #10: Recorded thoughts on top of the mountain 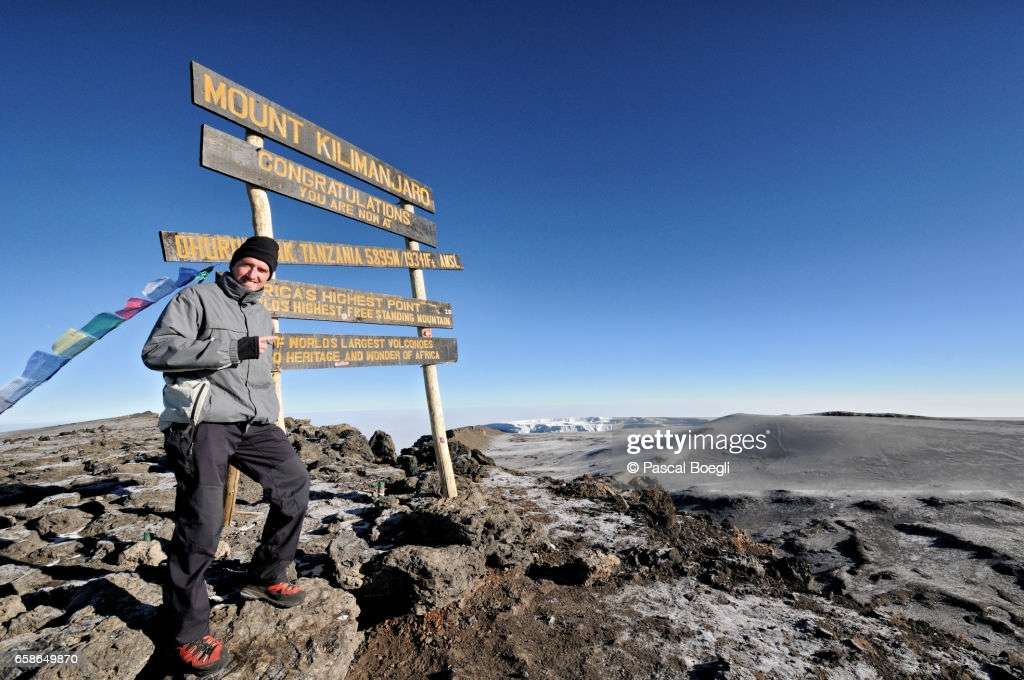 If you successfully summited the Mountain, you can record your thoughts about your achievement in a book stored in a wooden box on top of the Kilimanjaro summit!

How high is Kilimanjaro?

Kilimanjaro is the highest peak in the African continent at 19,340 feet or 5,895 meters above sea level and about 4,900 meters above its plateau base.

Is it africa's highest peak?

Yes. Mount Kilimanjaro is unmistakably the highest peak in Africa at 5,895 meters above sea level and around 4,900 meters above its plateau base.

How did mount Kilimanjaro get its name?

It’s a general theory that Kilimajaro is a blend of the Swahili word Kilima, which means ‘mountain’ and the KiChagga word Njaro meaning ‘whiteness’. Kilimanjaro’s European pronunciation, a KiChagga phrase, implies ‘we fail to climb it,’ is also one of the theories where Kilimanjaro got its name.

Mount Kilimanjaro is truly a great treasure to explore. The mountain is famous for good reasons, and it certainly is one of the most incredible places on Earth. We invite you to get in touch with us to discuss how you can start planning your Kilimanjaro adventure. Easy Travel is here for you every step of the way.