Tanzania isn’t only famous for wild animals. It’s also a haven for many birders as the birdlife of Tanzania is diversely rich.

Question: What do a hippopotamus, a black rhino, and a bat-eared fox have in common? Two answers: first, they all can be found in Tanzania, and second, they’re all terrestrial animals. They’re land-based. Isn’t it true that landlocked creatures are the ones we commonly pin to our safari dreams?

Think about it: the African savannah is famous for images of that lioness stalking a gazelle, or herds of zebra galloping alongside a thousand wildebeest. But if our safari gaze only reaches as high as the horizon, we’re missing a huge part of the wildlife in Tanzania.

Yes, I’m talking about birds. I’m talking about the winged ones, those flying high in the sky, encircling us and migrating in angles and singing their sweet melodies. Birdlife in Tanzania is equally as fascinating as the wildlife you’ll find at ground level; you just have to remember to look up. Here are some pointers…

3 reasons why the birdlife of Tanzania is the best

1. The birdlife of Tanzania is diverse

Let’s do some math: In Africa, 2,500 different bird species call this continent home. In Tanzania? There are more than 1,100 different species of bird. Now I barely passed algebra class but according to my calculations that’s nearly half of all African bird species in Tanzania alone. View Source

1. The birdlife of Tanzania is unique Forget the math. Here’s some new vocabulary: endemic. (View Source) If something is endemic that means it can only be found in a certain region or area. Now get this: in Tanzania alone there are 26 endemic species of birds. That’s more than two dozen avian creatures whose home is only Tanzania. (View Source) Some birds to look out for:

If you’re not a birder, worry not—Tanzania will turn you into one. But where to start? Where to look? Here’s a glance at some of our favorite winged ones:

From the 24 different species of bats that live on the slopes of Kilimanjaro to Serengeti’s ostrich, the largest living bird in the world, a trip to Tanzania offers access to some incredible bioregional variation, from savannah to subalpine, and with that brings bird variety.

The big birdlife of Tanzania The flashy birdlife of Tanzania 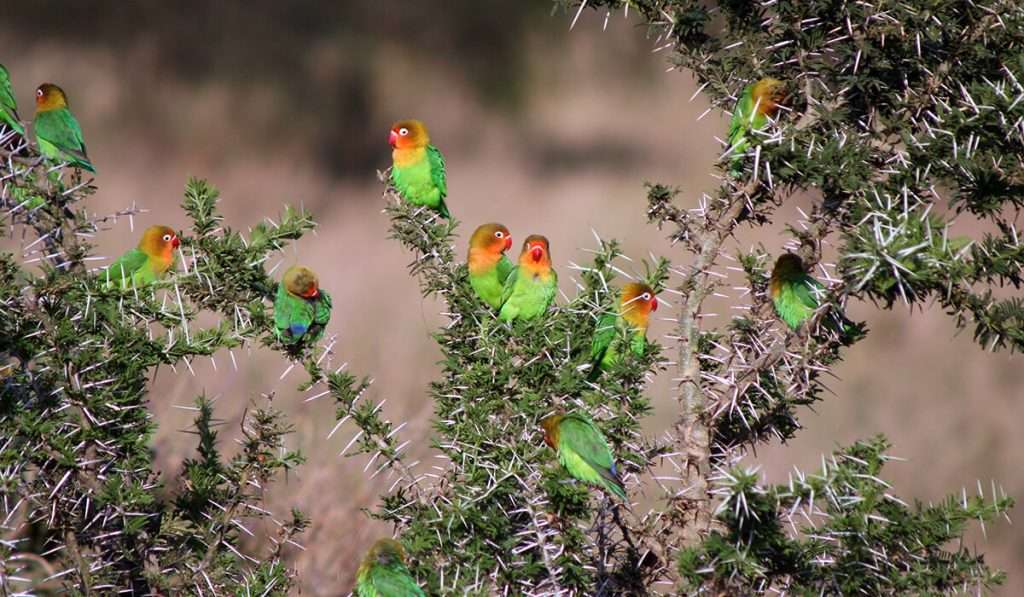 Fischer’s Lovebird (below): Yes, love is real and so are lovebirds! These small, near-threatened parrots are native to Northern Tanzania. Their namesake comes from the fact that lovebirds are serially monogamous and pretty social creatures.

Superb Starling: Little bird, large range. These starlings are found throughout East Africa and have a superbly iridescent chest and back.

The noble birdlife of Tanzania The 5 best places to see the amzaing birdlife of Tanzania

Tanzania crawls with world-class wildlife at every turn, but it’s skies are full of incredible birdlife, too. Talk to any birder and they’ll tell you: a trip to East Africa is like birding heaven. So please: don’t forget your binoculars.

Easy Travel can offer customized, bird-specific daylong and multiday trips to Tanzania’s hottest birding sights. Our guides and naturalists all carry decades of bird knowledge, so contact us today to get started.