“Travel is more than the seeing of sights; it is a change that goes on, deep and permanent, in the ideas of the living.”

When American historian Miriam Beard wrote this, I think she referred to the most important thing about travel, that journeys are as much about inner transformation as they are about the space in which we travel. But these landscapes—their creatures, mountains, lakes, and plains—they all matter, too, as they are the very things that stir this change within us in unforeseen ways.

Enter five of the most beautiful and elusive land mammals on Earth, animals found only in Africa and only in select regions of the continent. Enter five animals that will forever change your life when you look them in the eyes.

I know. “The Big Five” sounds like a board game, but its origins came from early African colonial hunting parties that traveled onto the African savannah in search of these trophy animals, which were the following: The African Elephant, Buffalo, Leopard, Rhino, Lion. The Big Five were sought after because they were elusive, few in number, and the most difficult to hunt afoot. Nowadays most of these Big Five are threatened or critically endangered as a result of poaching and human overreach. Here’s a look at these five creatures:

The African elephant is the world’s largest land mammal, and you’ll definitely see herds of these gentle giants on safari. Both male and female elephants have tusks, and, with few known predators outside of humans, elephants live an average of 60-70 years. Also, they’ve been known to eat up to 300 pounds of food in a single day! 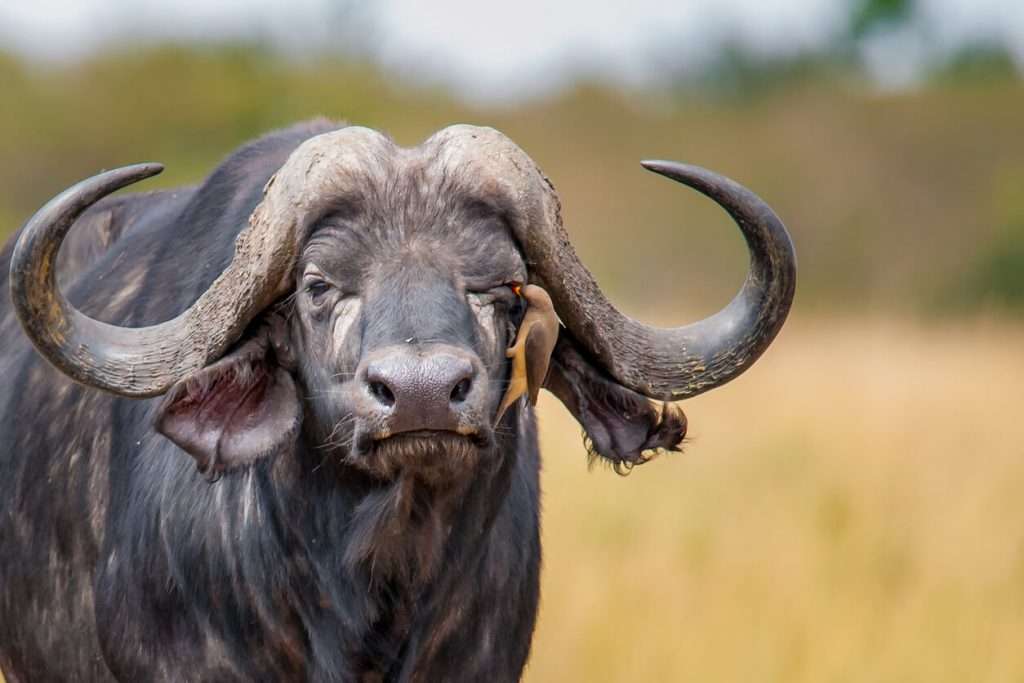 Fortunately, these burly bovines are now plentiful in Tanzania so you won’t miss this safari all-star, either. African buffalo are heavy, cow-like animals that like to live near water and need tons of grass to thrive. Because of their dietary needs and range, African buffaloes have been known to clash with human communities, knocking over fences and sharing diseases with domesticated livestock. Your first sighting of an African lion will stop you in your tracks. Immediately, you’ll notice the size of their teeth, the head, the mane, the paws, the tail. These creatures are the hallmark of an authentic African safari; it doesn’t get more symbolic than watching a lion saunter across the savannah through grassland and acacia. If there is uncanny beauty in the world, its captured in wild leopard print. Fierce, fast, and elusive, to witness this member of the Big Five is a big deal. Leopards can run up to 60 kilometers per hour (37 mph). Though not quite as fast as cheetah, the leopard is stealth and has incredibly strong teeth to crack through bone. Leopards are solitary and nocturnal creatures, and they typically lounge in the shade of trees and caves during the day.

To witness one of these ancient forms, either black or white, is both a miracle and a gift. Unfortunately, this is so because humans have hunted them near to extinction. These beasts can weigh up to 2,700 kilograms (6,000 pounds!), and their horns alone weigh a hefty 2-3 kilograms (6-8 pounds). In Tanzania, your best chances of seeing a Black Rhino are in the Ngorongoro Crater.

Easy Travel offers many options for you to plan your journey of a lifetime and to witness the Big Five in Northern Tanzania. Our guides all have decades of experience and know where to go, when to go, and how best to see these animals (and many more!). Click here for more info.