How to avoid the crowds on Kilimanjaro Mount Kilimanjaro is one of the most popular adventure travel destinations in the world. In fact, approximately 35,000 people per year try to summit the highest free-standing mountain in the world.

With these numbers, there’s a high chance you’ll encounter crowded pathways, which can decrease your time to enjoy the beautiful, rare scenes of the mountain. So, to have a satisfying Kilimanjaro experience, avoiding the crowd is an excellent choice.

How to avoid the crowds on mount Kilimanjaro

Every year, thousands of people flock to the mountain to see its majestic snow-capped peak. However, with such a high volume of visitors, it can often be quite crowded.

We have compiled a blog of tips on how to avoid the crowds when embarking on your journey to Mount Kilimanjaro. 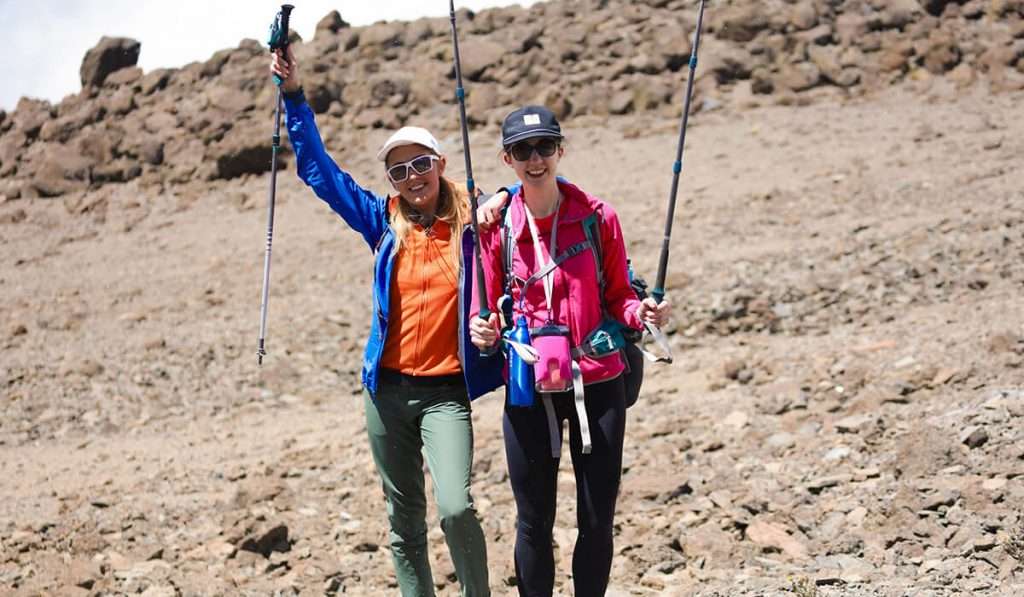 One way to guarantee that your trekking experience on Kilimanjaro won’t be crowded is to book a private climb. It’s the simplest way to avoid the crowd.

Based on your own preferences and with the help of our Kilimanjaro professionals, Easy travel can help you craft your dream Kilimanjaro tour. Each of our climbers has two to three porters along with a team of cooks and guides.

Thus, as the number of people joins the tour, the total number of people on the trail is easily multiplied. Booking a private climb gives you the freedom to choose how many people you want to be included or if you desire to go solo.

You’ll also have control over when you’d like to set out for the day and how fast to hike. Furthermore, you’ll also have the flexibility to take breaks when you want to, with the approval of the lead guide.

Note: Starting your daily hikes before the usual hike time of a group tour schedule time which is 8 AM, will let you be on the trail before 90% of the climbers who are sticking to their schedule 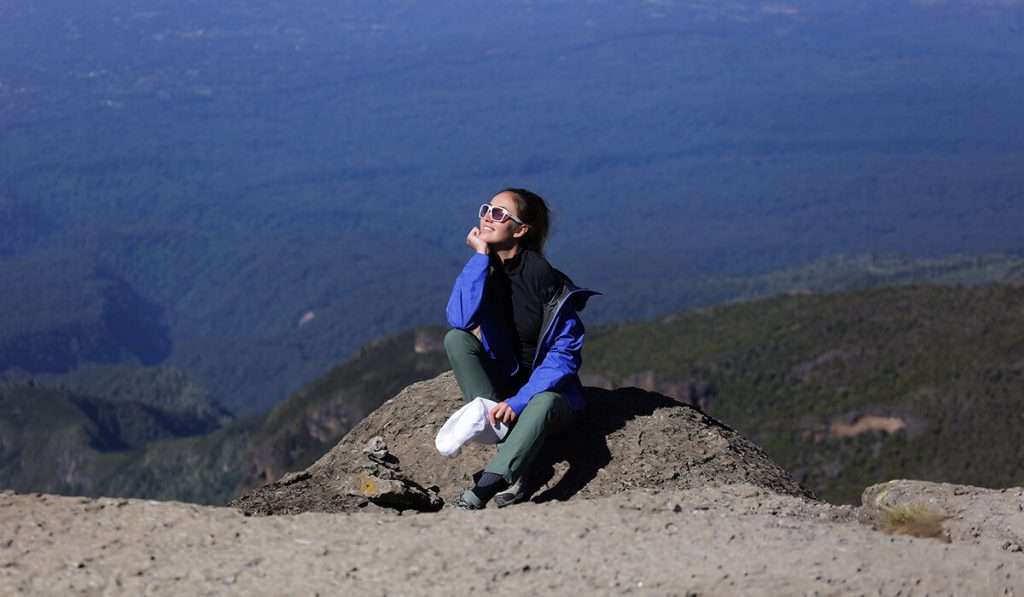 The dry seasons on Kilimanjaro are from July to October and December to February. However, if you’re a person who’s up for an adventure and is willing to gamble, schedule your trek during the short rainy season.

The short rainy season is the transitional period between the dry season and the wet season.  You’ll still have the chance of having good to fair weather while hiking the highest free-standing mountain in the world.

Most operators in Tanzania don’t operate group climbs during those times, except for Easy Travel and few others. In addition, during the short rainy season, mornings are typically clear and rains usually come every afternoon and evening.

Those who hike fast can reach the camp even before the afternoon rains start. So, if you don’t mind these conditions, this is a good time to visit to avoid the crowd and have the mountain almost by yourself.

Note: The Rongai Route is a good route option during the rainy season since it receives less rainfall than other trails. There are over 35,000 people who climb Kilimanjaro each year. Although this number won’t be a problem due to the vastness of the mountain, most of these numbers are only centered on two routes—the Machame and Marangu Route.

Thus, picking the least traveled route can essentially help you avoid the huge crowd during your climb until all the routes meet on higher elevations. Along with Machame and Marangu routes, the following are your best alternative, well-established routes for a Kili climb:

Picking any of these routes will dramatically reduce the crowds—not only on the trails but to campsites as well. However, for a much better experience, make sure to pick a route that’s fitting of your experience and ability to acclimatize with the high altitudes.

Note: Some of the well-established routes with lesser people are the Lemosho, Northern Circuit, and Rongai. Note: Choosing sites like the Kosovo and Crater Camp requires a special permit, so additional fees are added for these arrangements. In addition, it must also be arranged in advance to get the permit before staying at the said camps. 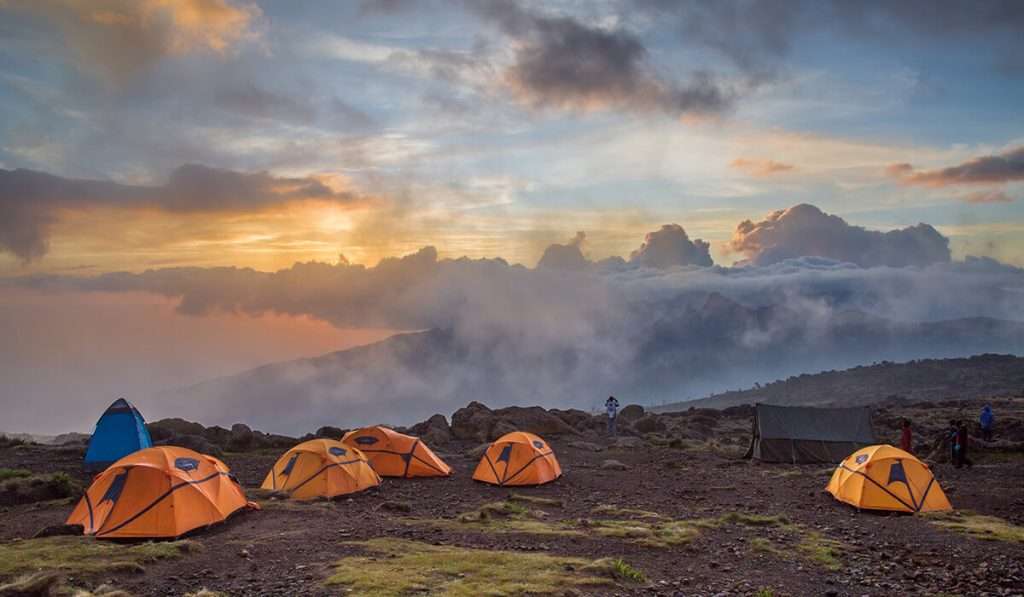 Summiting during the full moon appeals to many trekkers. This is because it gives trekkers substantial light to see the mountain while hiking during the middle of the night at the final ascent.

Furthermore, the view is simply stunning and magical as the bright moonlight reflects the glaciers, making them sparkle. This is why most full moon tours on Kilimanjaro are fully-booked.

This is why you should book your summit far from the full moon to avoid the crowds.

Note: By starting your climb in the middle of the week instead of the usual group departures which are on weekends or Monday, you’ll encounter a much lesser crowd.

How many people climb per year on Mount Kilimanjaro? 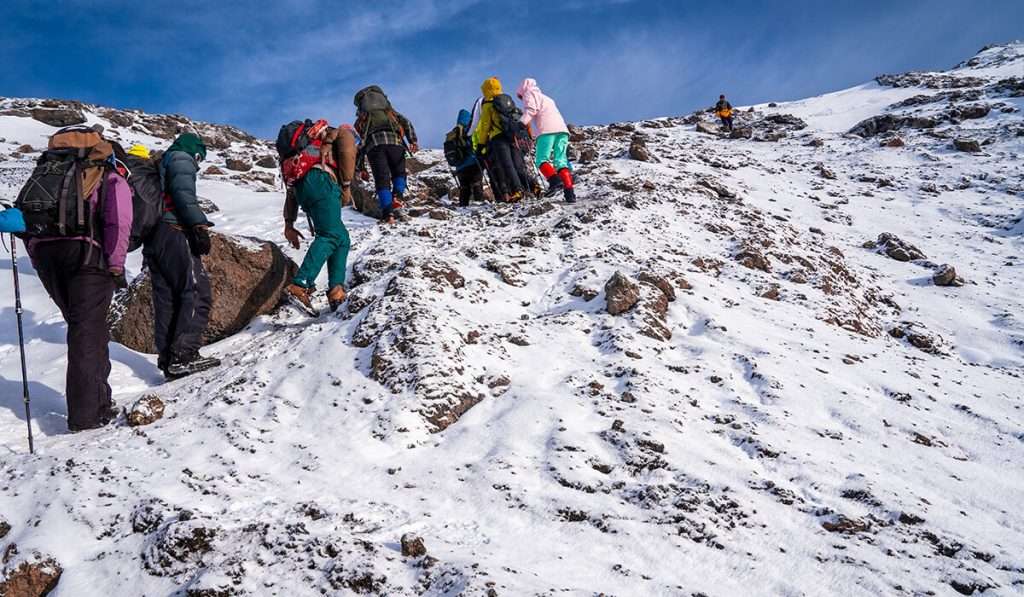 There are over 35,000 people who climb Kilimanjaro per year.

How busy does mount Kilimanjaro get? 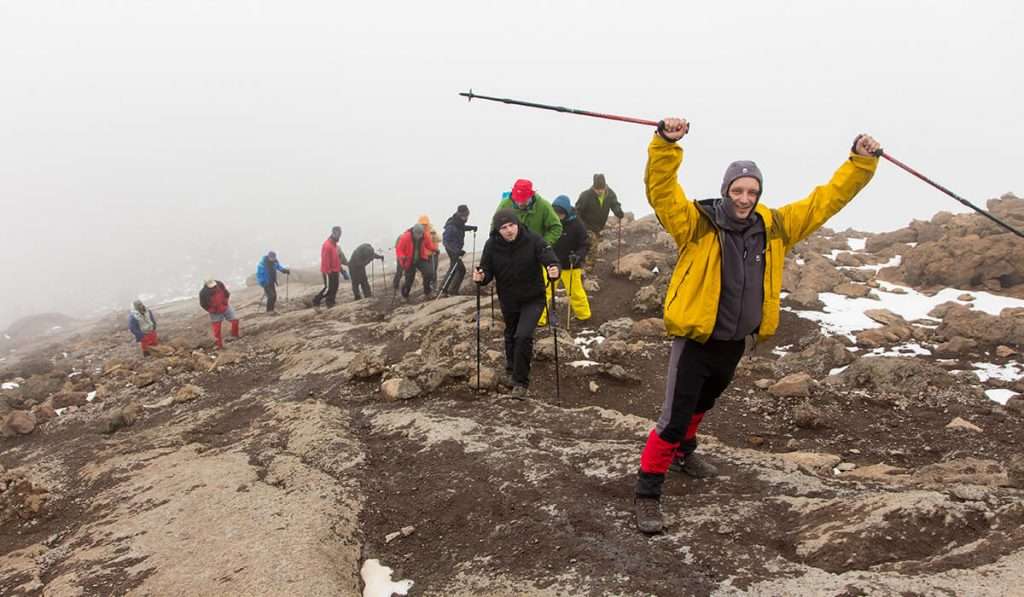 Mount Kilimanjaro gets particularly busy during the full moons, every January to early March and June to October. These months offer clear skies, fantastic views, and sunshine—which are great hiking conditions.

Nonetheless, it’s best to note that the weather may change drastically, irrespective of the season. Thus, it’s best to come prepared with the right gears.

When is the busiest time of year on Kilimanjaro? The busiest time of the year in Kilimanjaro is during June, July, August, September and October. This is because these months have great weather conditions and offer the best views of the mountain.

Conclusion: Which season is best to climb mount Kilimanjaro?

In general, the best season to climb Mount Kilimanjaro is throughout the driest and warmest months—December to mid-March and mid-June to October. However, it’s best to note that these months are also the busiest time of the year.

So, if you want to have lesser crowds during your Kili climb, these months aren’t an ideal option. But, there are other options that you can take to avoid the crowd in the mountain even during these months.

Refer to the tips above to find the ideal option for you or contact Easy Travel for more options. Our team of Kilimanjaro Specialists will assist you with planning your adventure from start to finish!