When is the best time to see the great migration 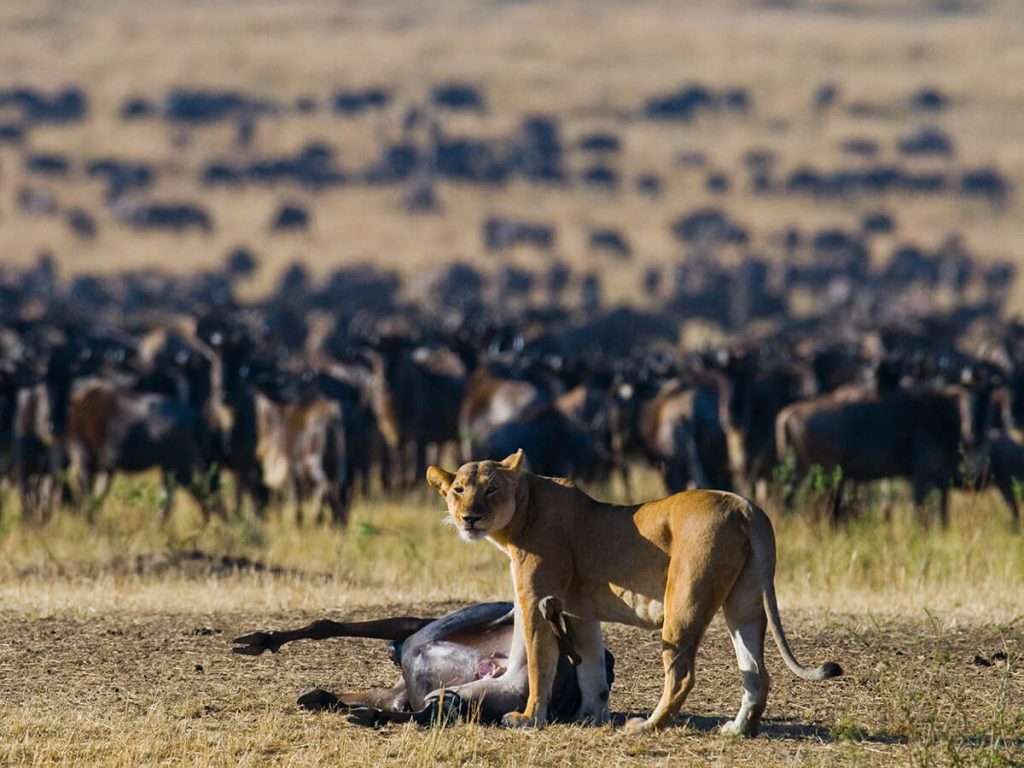 Want to see Tanzania’s wildlife in its full splendour? Then, visit during the best time to see the great migration.

The Great Migration is East Africa’s most bucket-list-worthy safari experience. Each year, 1.4 million wildebeest,  a round trip between Tanzania and Kenya, accompanied by hundreds of thousands of zebra, and gazelle.

The mind-boggling numbers attract wildlife lovers from around the globe to watch the suspenseful river crossings or the 500,000 newly born wildebeest calves take their first steps.

But did you know the Great Migration isn’t a one-and-done event? It’s a year-round cycle, with each month offering a different experience. In this guide, you’ll find a complete breakdown on when is the best time to see the Great Migration and which of the Serengeti’s four regions has the best front-row seat to all the action.

Where to see the great migration

The Great Wildebeest Migration holds the title of “The Greatest Wildlife Show on Earth” for a reason. Each year, roughly between May and December, millions of wildebeest, zebra, and gazelle begin a roundtrip journey between Tanzania’s Serengeti National Park and Kenya’s Maasai Mara. With hungry predators following their every move, it sets the scene for an unforgettable safari experience. But this event isn’t wholly predictable.

It’s a natural phenomenon and depends on the rains, environmental factors, and animals.

Think of the below breakdown as a general guideline of the best time to see the Great Migration.

“What happens if you’re visiting Tanzania outside of these months?” you ask.

Well, you’ll still see animals. The Serengeti is vast, and there are millions of animals involved so you’re bound to witness the herds walking across the endless plains.

The best time to see the great migration: Month-by-month breakdown

The Great Wildebeest Migration is one of the most amazing natural phenomena on earth. From July to October, an incredible number of animals migrate from Tanzania’s Serengeti plains across the Mara River and into Kenya’s Masai Mara Reserve.

It’s a breathtaking sight that you won’t want to miss! Here’s when to see the migration, month-by-month. Love baby animals? The Southern Serengeti is where the circle of life begins in Tanzania. The herds make their way from the Central Serengeti and move between the Ndutu area and the Ngorongoro Conservation Area, where the calving season begins.

The rain has dried up by January, leaving a buffet for the herbivore herds in its wake. The wildebeest feast on the newly-sprouted grasses around Lake Ndutu and Kusini as the females prepare to give birth.

Within 10 minutes after birth, the calves take their first steps and get ready to move with the massive herd. This gives rise to predator action as the massive herd has to defend its new-born from hungry carnivores.

If seeing this incredible spectacle is high up on your bucket list, this is one of the best periods to book a Great Migration safari in Tanzania.

What we recommend: The 7-Day Wildebeest Migration Calving Season Safari | $3768 per person sharing.

April to May: The herds move from Ndutu to central Serengeti Leaving behind a barren landscape in the south, the wildebeest herds follow the call of thunderstorms to the Central Serengeti.

Book a safari between April and May, and you’ll see massive herds move through the Moru Kopjes towards the Western Corridor. Here, the animals congregate in the thousands on the banks of the Mbalageti and Grumeti rivers.

The only problem? It’s a treacherous river crossing with crocodiles and other predators lying in wait.

What We Recommend: The 6-Days Tanzania Migration Safari |$2599 per person sharing.

June: The Grumeti river crossing begins in the western Serengeti In June, the drama of the Great Migration starts. While the Grumeti and Mbalageti river crossings aren’t as intense as the northern crossings, you will not be bored.

The crocodiles in the murky waters pick off wildebeest as they attempt to make their way across, and testosterone-fuelled males kick off the rutting season.

As this is the shoulder season for the Great Migration, it’s a fantastic option if you want to avoid the crowds in the Northern Serengeti and scoop up a cheaper safari package.

What We Recommend: The 7 Days Grumeti River Migration Safari | $3929 per person sharing. Are you looking for the most sought-after Great Migration experience? With the Grumeti river crossing behind them, the herds move from the west to the Northern Serengeti into Kenya’s Maasai Mara.

…And the stakes get higher as the animals attempt to cross the Mara River. Nile crocodiles snap their jaws as the herds trample through the waters, and lions are ready to pounce on the other side.

Above, Marabou storks and vultures stalk the skies, ready to feast on the unlucky few who don’t make it. The game viewing is sensational, frenzied, and unmatched.

With so much action, it’s not surprising this is Tanzania’s high season. Book your flights, lodging, and Great Migration safaris early. It fills up fast. 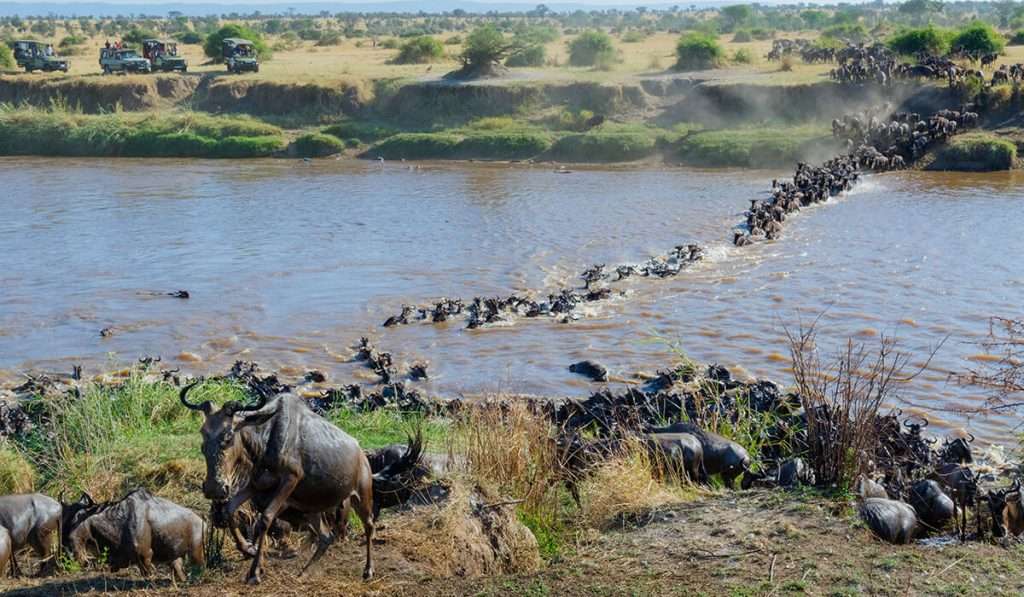 After the drama of the Mara river crossing, the herds move on to Kenya’s Masai Mara. But that doesn’t mean your Tanzania safari experience is dull over these months.

Some of the animals remain in the northern Serengeti on the lookout for fresh grass. You’ll find the animals wandering over the plains, re-crossing the river, and running from predators while in search of food.

By the first or second week of October, the herds will come back from Kenya and move from the Northern Serengeti to Central Serengeti.

What we recommend: The 7 Days Mara River Migration Safari | $4165 per person sharing With the herds returning to Tanzania, the cycle starts to begin again. Moving from the north, the animals begin their journey to reach the southern plains and the freshly sprouting grasses.

Don’t want to miss the migration? Plan a safari for the central Serengeti and Seronera Valley. It’s quieter than the northern regions of the park, and you won’t have massive crowds around predator sightings. The only downside? It’s the rainy season.

While you might have less than perfect weather, it’s an excellent time of year to catch the migrating birds returning to Tanzania.

The lack of crowds and storms have another bonus: safari deals! You’ll find lower rates at lodges and scoop up safari packages for almost half the price.

What We Recommend: 6 Days Tanzania Migration Safari | $2599 per person sharing.

How to see the great migration herds Want to maximize your chances of seeing the river crossings and new-born calves? Here’s what you can expect from the different transport options for Serengeti National Park. 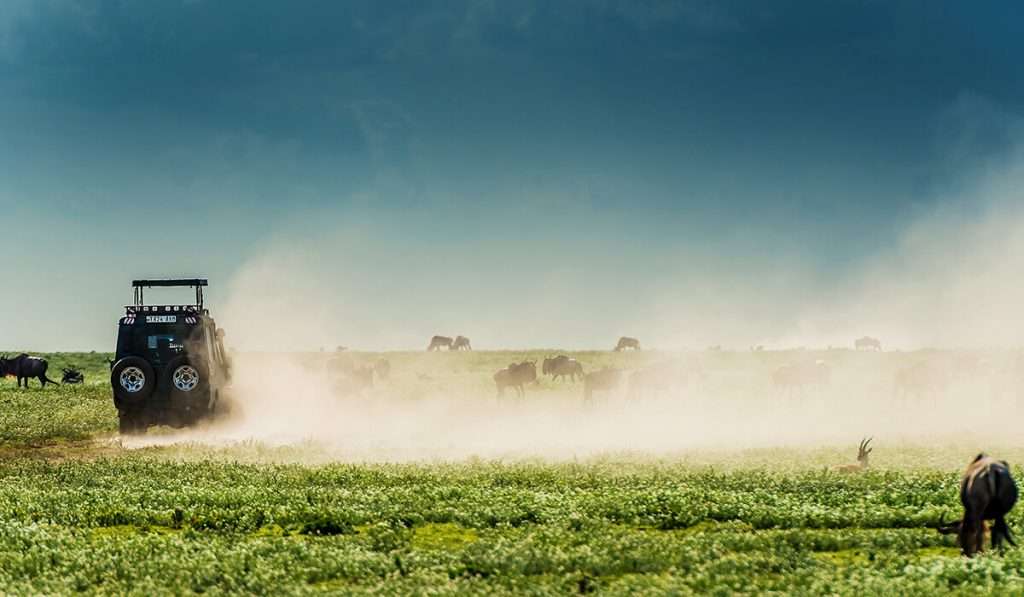 Can you self-drive in Serengeti National Park? Yes, you can! That said, we don’t recommend it. WhThe Serengeti is vast (it’s 14,763 square km), and you can easily get lost. You’ll also need to have a 4WD vehicle, and some of the roads (like the one running from Naabi Hill gate to Seronera) are notorious for their rough driving conditions.

If you do decide to go with a self-drive option:

A guided safari tour is the best way to get around the Serengeti and see the Great Migration herds.

You can book various package options to suit your needs ranging from budget-friendly tented camps to Tanzania’s top luxury lodges. All the options include a certified safari guide and vehicle, leaving you to sit back and enjoy the experience.

The advantages of signing up for a guided safari package: For something different (that you’ll rave about for years), book a hot air balloon safari over the Serengeti.

Taking off before sunrise, you’ll watch the landscape come alive and silently glide past the massive herds of wildebeest and other wildlife.

It’s a unique way to see the Great Migration and get a birds-eye view of the immense scale of the Serengeti and the roaming herds.

Ready to start planning your trip to Tanzania? Or do you have questions about the Great Migration?

The annual migration of wildebeest is a spectacle to witness, so speak to our safari experts today and we’ll curate an experience around your budget and tastes.