What and when is calving season during the Great Wildebeest Migration East Africa’s greatest gift to the world is its great national parks and resident wildlife that move together in mega herds.

The land in Tanzania is an especially beautiful safari destination, offering superb game drives during the dry season and the rainy season.

Perhaps one of the most well-known safari experiences in East Africa is The Great Wildebeest Migration, a natural phenomenon where millions of wildebeest move in a circular fashion in search of fresh grass plains and drinking water. If you’re interested in learning how these herds of wildebeest navigate the land and where they migrate to, you can speak to a safari Migration expert at Easy Travel or read one of our in-depth blogs.

Today, however, we are going to discuss one of the pinnacle moments in The Wildebeest Migration, where hundreds of thousands of wildebeest new-born calves are born together. This spectacle of an event is called The Calving Season, a breath-taking moment to witness on your next African safari.

Calving season: What and when is it? 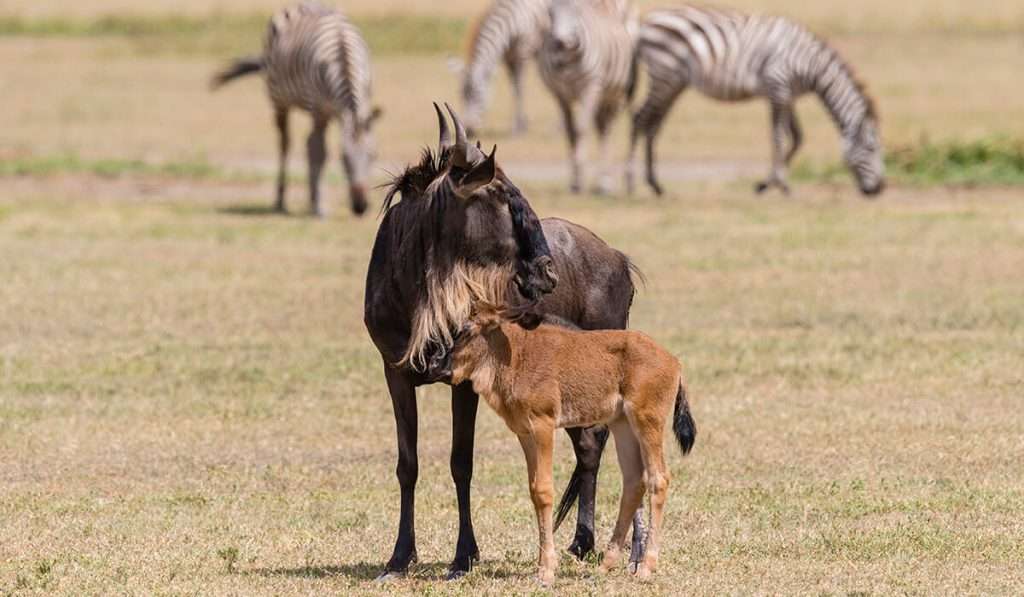 The Wildebeest Calving Season is one of the most popular times to visit Tanzania. This is when huge herds of wildebeest give birth in the southern Serengeti. The calving season usually takes place between late January and early February, but it can start as early as December and last until March.

Below we will break down the dates, and look further into why it is such a spectacular time of year to experience Tanzania.

What is the great wildebeest migration calving season? 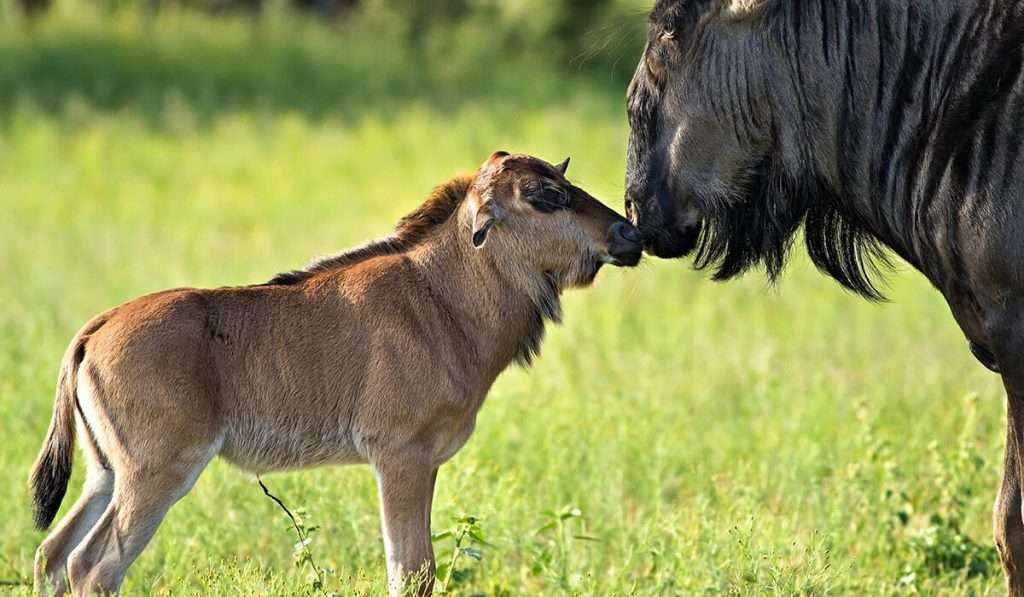 During The Great Wildebeest Migration, the annual migration finds takes a standstill in Tanzania where hundreds of thousands of pregnant wildebeest give birth during the first few months of the year. The event occurs during the green season, and it is a spectacular time to go on a migration safari.

Easy Travel offers the special Wildebeest Calving Season Safari where you and a professional safari guide will witness the event up close. When you’re on a game reserve with an abundance of wildlife, it’s important to have a safari guide at all times to keep you safe and informed about the land and its animals. On a Wildebeest Calving Season Safari, you will witness hungry predators hidden in the African savannah trying to catch and eat the baby animals. This hot pursuit predator action gives rise to the herds defending their calves, a powerful sight to see.

Game viewing during this birthing season is a truly special experience, so if it excites you, consider getting in touch with our professional safari migration experts to start planning your dream safari experience.

When is the great wildebeest migration calving season? 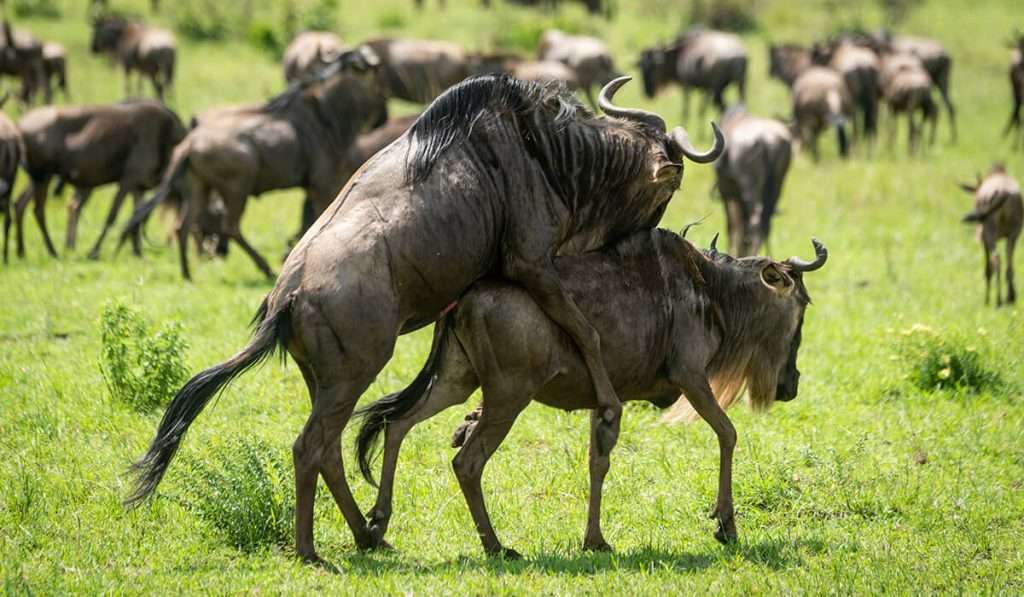 The Great Wildebeest Migration does not necessarily have a beginning and an end as the herds move across the endless plains in search of fresh food and water in a clockwise direction. Nature has no ruler, as they say, and so it’s not possible to give exact dates when the next calving season will take place.

However, the annual calving season typically occurs during Janurary and February, so if you’re interested in seeing a wildebeest calf, make sure to book for these months. Be aware that the beginning of January is considered the peak safari season in Tanzania.

During peak safari season, the cost of safari lodges is at its highest, so if you’re coming on a budget, consider booking for later in the month. If the crowds of peak season are a deal-breaker for you, let our safari migration experts know when you’d like to visit Tanzania to witness the herds on their onward journey.

Where is the great wildebeest migration in January and February? 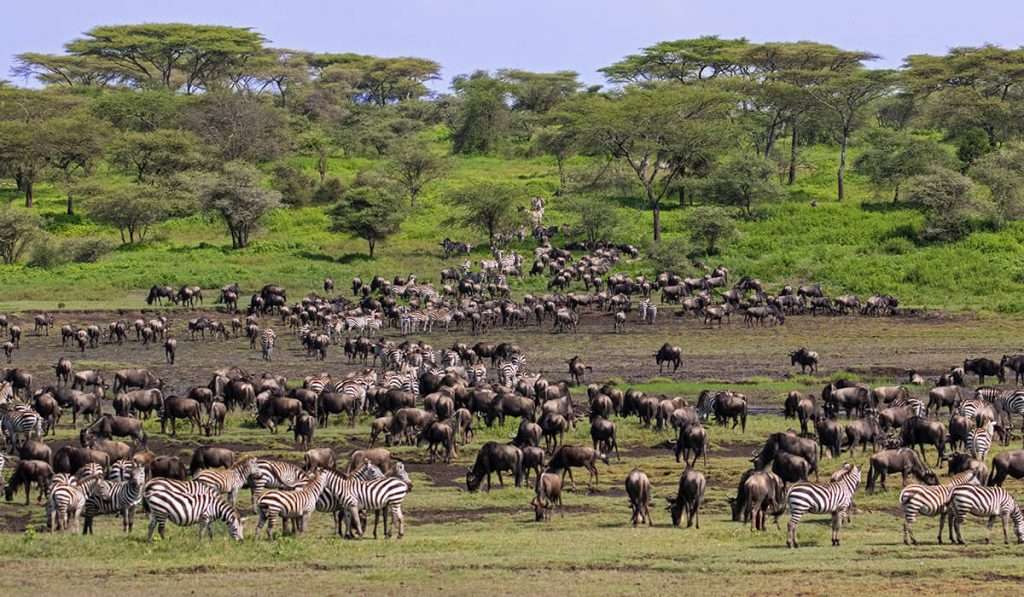 The calving season mainly takes place in Serengeti National Park, but the herds stretch all the way into the  Ngorongoro Conservation Area in Ndutu during this event, too. These are perhaps the most famous areas in Tanzania, as they offer outstanding wildlife experiences.

The concentration of wildlife is particularly breath-taking during the calving season, where you can witness hundreds of thousands of new-born calves on a morning game drive.

Other options for the great wildebeest migration 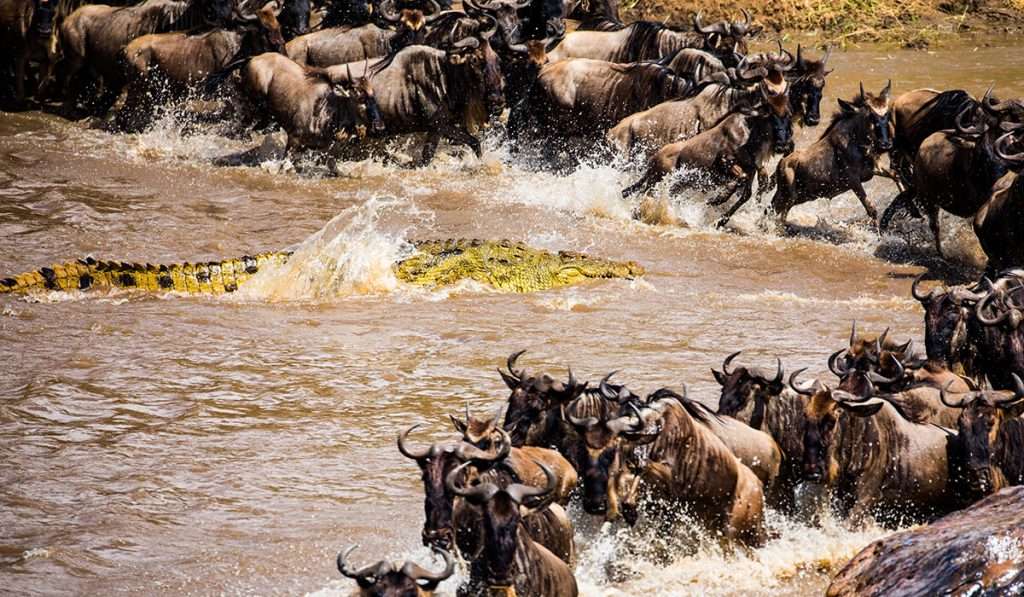 If you’re looking for a time when the herds of wildebeest are faced with a concentration of predators, then going on a safari to the Mara River from July to August is a fantastic option. During this time, you will witness thousands of wildebeest attempts to cross crocodile-infested waters and face hungry land predators on the other side.

Thousands will attempt to cross the river banks for days, and thousands more will perish.

Other options for a safari in Tanzania 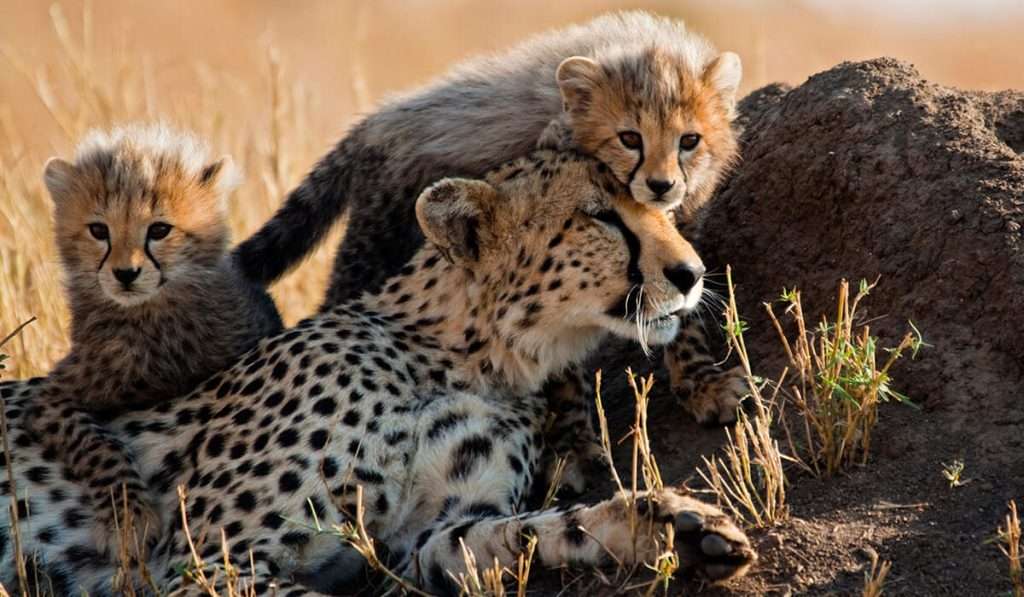 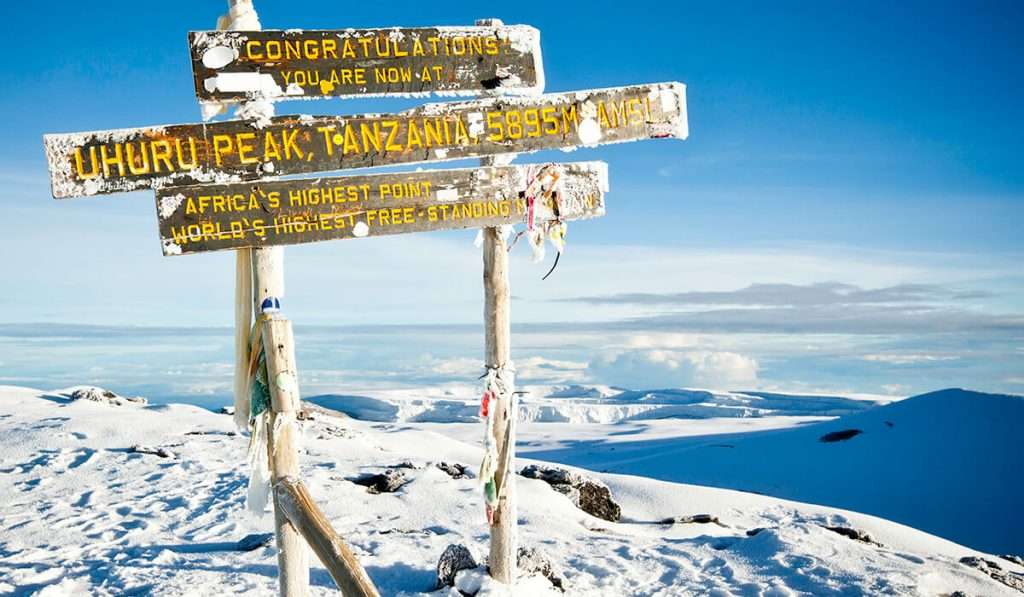 Fancy landing at Kilimanjaro International Airport and conquering the tallest freestanding mountain in the world? Read all about Mount Kilimanjaro here, or contact our Kilimanjaro experts to find out more. 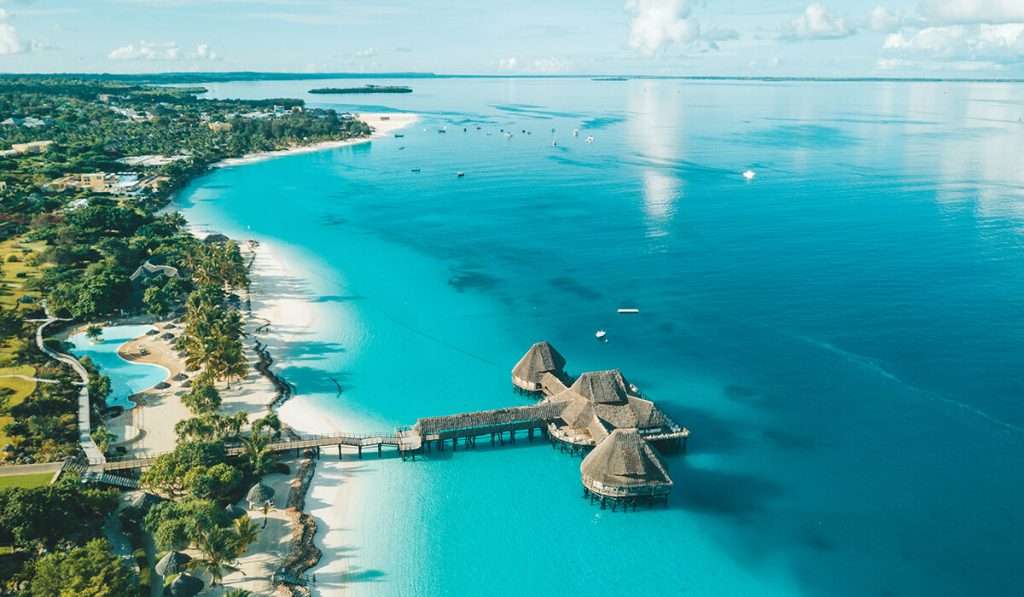 If you’re seeking turquoise water, white sand beaches, and delicious food, then visiting Zanzibar Island could be your next dream holiday. Contact us to find out how you can experience the magic of Zanzibar.

Conclusion: A True search of sustenance

The annual migration of wildebeest is a memorable experience that never loses its magic. Calving season is the event with the biggest concentration of wildebeest in the world, where baby wildebeest will be running around in the Serengeti National Park before heading off to the historical crossing of the Mara River.

If you’d like to know more about The Great Wildebeest Migration, read up here or get in contact with Easy Travel today.